KHARTOUM, May 22, 2005 (Xinhua) — The African Union (AU) began its operation Sunday to limit the locations of forces of both the Sudanese government and the rebel groups in Darfur, local media said. 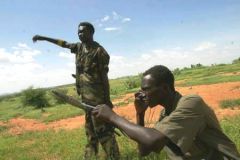 The AU team of verification and limitations of locations in Darfur started its visit to Darfur to specify the locations controlled by the warring parties in accordance with the ceasefire agreement signed in April 2004.

Minister of State in the Sudanese Foreign Ministry Tijani Salih Fideil urged the Justice and Equality Movement, one of the two main rebel groups which had reportedly rejected limitation of its locations, to implement the ceasefire agreement it had signed with the Sudanese government.

He denied that his government had received any notification from the AU on the time to resume the peace talks with the Darfur rebel groups in Abuja, capital of Nigeria.

The Sudanese official added that consultations are still underway on the implementation of the decisions issued by recent summit in Tripoli which recommended the next round of Darfur peace talks to be held early June.

Clashes flared up in Darfur in February 2003 when local farmers took up arms against the government, accusing it of neglecting the barren area. Thousands of people have been killed and more displaced in the violence.

Rounds of peace talks between the Sudanese government and Darfur rebels in Abuja have failed to yield fruits.