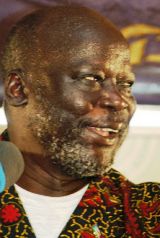 The civil war, which was Africa’s longest-running, left an estimated two million people dead and more than four million displaced.

Garang, who only returned to Khartoum Friday for the first time since the 1983 launch of the civil war, also took the oath as head of a new autonomous administration for south Sudan, which he will now begin to form.

His swearing in followed the promulgation of a new power-sharing constitution provided for under January’s peace agreement.

The balding, US-educated economist-turned-guerrilla once derided in the West as a Soviet stooge, has finally won respectability as southern leader.

The SPLM leader’s aides arrived in Khartoum in April and have been hammering out details of the power-sharing agreement with the ruling National Congress of President Omar al-Beshir.

They have also been working to transform the SPLM into a political party, opening offices across the country and organising rallies to explain their agenda to the people.

The completion of the process brings full circle Garang’s transformation from rebel leader to statesman.

But as he swaps his military fatigues for civilian clothes, Garang faces the daunting task of convincing southern militia leaders previously supported by Khartoum to sign up to the peace agreement.

Garang also faces the challenge of rebuilding the south and neighbouring areas covered by the peace deal, including the Nuba Mountains and southern Blue Nile state.

Born in the remote Bor district in 1945, Garang was among the few in British-controlled southern Sudan to enjoy education beyond primary level.

After completing his secondary education in Tanzania, he went on to study economics at Grinnell College, Iowa.

In 1970, he walked away from a graduate fellowship at the University of California, Berkeley, to take up arms against the Khartoum regime.

The so-called Anyanya uprising ended with a 1972 peace agreement under which Garang joined the Sudanese military, eventually rising to the rank of colonel and receiving training at the US army infantry school in Fort Benning, Georgia.

He returned to the bush in September 1983, the same year then-president Gaafar Nimeiri imposed Islamic law in defiance of the 1972 accord.

Ironically, Garang had been sent by the government to suppress a mutiny by southern troops in his home district of Bor.

The 105 Battalion of the Sudanese army, which he had commanded in the 1970s, became the nucleus of the rebel Sudan People’s Liberation Army (SPLA).

Washington’s Cold War alliance with the Khartoum government prompted Garang to throw in his lot with the pro-Soviet government of neighbouring Ethiopia.

The overthrow of the Soviet-backed regime in Addis Ababa in 1991 and the displacement of the SPLM from Ethiopia prompted a disastrous split in the movement, which brought Garang to his lowest ebb.

The SPLA divided on ethnic lines with Garang maintaining the support of his Dinka people, while the rival Nuer sided with breakaway leader Riek Machar.

The subsequent internecine fighting appalled even sympathisers of the southern cause.

The Islamist-backed regime brought to power by a 1989 coup sent waves of volunteer militiamen to the south and Garang’s troops were forced back from the large swathes of territory they had occupied to a narrow border strip.

However the coup was ultimately to prove a blessing in disguise as the new government’s policies pushed northern opposition groups into alliance with the SPLA and discredited Khartoum in US eyes.

The election in 2000 of US President George W. Bush, whose Republican Party included many Evangelical sympathisers with the Christian cause in south Sudan, provided a further boost.

Through the long and often painstaking negotiations that followed a framework agreement in July 2002, Washington maintained the momentum that propelled the two sides forward.

Now that the war is finally over, Garang makes no secret of how much remains to be done to win the peace.

“We haven’t had tarmac roads since creation. We are literally starting from scratch,” Garang told AFP earlier this year in his interim base in the southern town of Rumbek.