KHARTOUM, Sudan, Aug 10, 2005 (AP) — He battled the northern government through 21 years of civil war, founded the southern rebel movement at the side of the beloved John Garang and strategized many military successes in the long fight for autonomy. 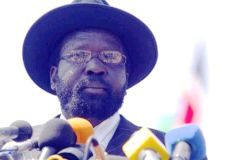 Now, after Garang’s death in a helicopter crash, Lt. Gen. Salva Kiir Mayardit is stepping into his shoes. On Thursday, the commander of the Sudan People’s Liberation Army will be inaugurated as Sudan’s first vice president and president of the new, autonomous southern government, part of a peace deal power-sharing arrangement between north and south.

The job comes with a particular twist: Kiir must make unity with the north attractive to southerners – even though he himself has called for secession.

While Kiir has no political experience, analysts and diplomats say he’s up to the challenge. And his popularity in southern Sudan could prove to be the glue that holds the country together.

“I know him as somebody who thinks before he takes a decision, but when he takes a decision, he sticks with it,” said Jan Pronk, the United Nations representative in Sudan. “I know him as somebody who has the respect of all the commanders (in the SPLA) and who has respect also from the people in Khartoum because he is a strong military commander.”

Kiir also is known for having a cool head and being able to resolve disputes.

“The man is no slouch intellectually, and he is a leader,” said Roger Winter, the U.S. special representative to Sudan. “He’s his own man, a successful man, a well-liked man in the movement, he’s got a broad following, he’s got a different set of experiences . . . In spite of the fact that he’s a military man, he’s also got a reputation for being collegial in the way he does business. We all know that wasn’t always Dr. John’s (Garang’s) trait.”

In the rebel movement that was known for various splits since it was organized in 1983, Kiir stands out as one who never challenged Garang – declaring himself a fighter, not a politician.

A member of the Dinka tribe, southern Sudan’s largest, Kiir joined the separatist Anyanya movement as a teenager in the 1960s. When that rebellion ended with a peace deal in 1972, he joined the Sudanese army and rose to the rank of captain.

But in 1983, he joined with Garang in deserting from the army and forming the Sudan People’s Liberation Movement/Army, a group that fought for autonomy for the mainly animist and Christian south from the Islamic-dominated northern government.

Kiir – who had more military experience than Garang – was relied on heavily in fighting. Many of the SPLA’s biggest successes in battle were attributed to his leadership, and in 1999 he was made the rebel army’s chief of staff.

He also was a key player in early peace negotiations, leading the southern team to Machakos, Kenya, in 2002 and signing a protocol under which the south was granted the right to hold a referendum on self-determination six years after the signing of a peace agreement – an event finally happened in January.

Kiir was absent from later stages of the negotiations under which the south was granted rights to its natural wealth – oil – and power-sharing in the central government, including giving the post of vice president to the SPLM leader.

Shortly after Garang took office, he named Kiir, his longtime deputy, as vice president of the government of southern Sudan.

In the days since Garang’s death July 30, Kiir has promised to continue the late leader’s vision for Sudan through implementation of the comprehensive peace agreement. Garang had always said he wanted a unified Sudan, with more autonomy for the south.

Kiir, however, was known to favour a separate state in southern Sudan, an ideology that makes him popular in the south. A recent USAID survey said about 96 per cent of southerners want to secede.

The peace agreement, with its power-sharing measures, is supposed to help make unity more attractive to southerners before they hold their referendum on secession in 2011.

Kiir has always been popular in the south. As recently as December, there was a near split within the SPLM when it was rumoured Garang might remove Kiir as chief of staff.

Ghazi Salahuddin Atabani, a former presidential adviser in the peace talks and now head of a think tank, said Kiir’s calm temperament would help him.

“Those dealing with him are always at ease, more than they used to be in the presence of Garang,” Atabani told Al-Wan newspaper. “Therefore, he is more capable of handling a political action with wisdom and would be able to unify the southerners.”

But Atabani said that Kiir would also have to devote time to northern issues and cultivating international contacts – to becoming a politician – lest he face difficulties in the national unity government, which includes President Omar al-Bashir and Vice President Ali Osman Mohammed Taha.

“It takes three to tango in this government, and you can’t do it very well with one of them limping,” Atabani told The Associated Press.