Sudanese vice-president appeals to citizens to resume trade in south

Text of report in English by Sudanese TV on 25 August 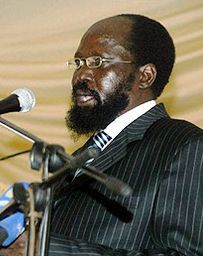 Aug 25, 2005 (Khartoum) — First Vice-President [Lt-Gen] Salva Kiir Mayardit, has said the government of the south was keen on pursuing dialogue with the southern [political] parties towards consolidating southern ranks.

Addressing a big rally in Juba, the capital of the southern government, he said the return of the displaced is top priority of his government and called on all the Sudanese citizens to resume trade and other economic activities in southern Sudan.

The first vice-president told the rally that his visit to the south comes within the framework of completing the nominations for the executive nad legislative systems.

He also said his government was determined to finalize solution for the operations of the Lord’s [Resistance] Army [LRA] in Southern Sudan on the basis of the three options, one of which, is a peaceful solution between the LRA and the Ugandan government.

Grain contracts may have played role in removal of S. Sudan minister