17 Sept 2005 (NEW YORK) — The European Union (EU) has decided to resume its cooperation with the Sudan following the developments witnessed in the country. 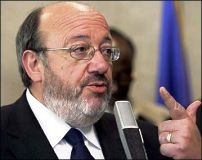 The decision was conveyed to the Minister of Foreign Affairs, Mustafa Osman Ismail, by the EU Commissioner for Development and Humanitarian Aid, Louis Michel, on the sidelines of the UN’s World Millennium Summit in New York Friday 16 September.

Sudan’s acting envoy to the UN, Ambassador Omar Bashir, said in a statement to Suna the meeting further discussed the latest developments in Sudan as well as the cooperation between the Sudan and the EU, explaining that the EU commissioner promised to visit Sudan in the coming period.

Meanwhile, the minister of Foreign Affairs participated in the round-table discussion on the International Conference for the Great Lakes region, which was attended by the founding countries, friends of the Great Lakes Countries, the UN and other countries.

Ambassador Bashir told the Sudan News Agency, Ismail briefed the meeting on the latest developments in Sudan as well as the efforts to implement the Comprehensive Peace Agreement and to solve the issue of Darfur.

Ismail further affirmed the importance of promoting the key roles of the regional organizations in solving issues of the region, pointing out to the experiences of the Inter-Governmental Authority for Development (IGAD) and the African Union with Sudan.

The Minister further urged donors to meet the post-conflict urgent needs of the countries such as issues of resettlement of refugees and displaced, disarmament and other issues.

Finland to participate in UN peacekeeping mission in Sudan

EU grants another EUR15 mln in aid to Sudan’s Darfur