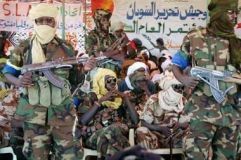 “Growing rifts between both political leaders and military commanders as well as between the Zaghawa and Fur factions of the SLM/A have led to a breakdown in the movement’s command structure.

It has also created a disconnect between political aspirations at the peace talks in the Nigerian capital, Abuja, and military operations on the ground, observers noted.

SLM/A mediators arrived at the reconciliation meeting to try and resolve the dispute between its president and its secretary-general, Minni Arko Minnawi, in order to present a unified front when the stalled African Union-sponsored talks resume on 21 November.

Although Minnawi urged Nur to join the talks, he refused, saying he was not consulted in the preparations of the conference. Observers fear the congress will elect a new leadership in Nur’s absence, which would almost certainly result in a split in the rebel movement.

“We arrived this morning from the headquarters [in the mountainous Jebel Marra region in central Darfur], where we met the president and some field commanders,” Ahmed Abdel Shafiq Yagoub, one of the chief negotiators at the Abuja peace talks, was quoted by Reuters news agency as saying.

“We are worried that this situation now is going to divide the movement,” he added.

Local sheikhs in the western Sudanese region claim that the most recent scorched-earth campaign by government-aligned forces, which started on 18 September and affected more than 20 villages, had targeted Zaghawa villages. This followed considerable SLM/A activity by rebels loyal to SLM/A’s Zaghawa commander, Minnawi, after he refused to attend the peace talks in Abuja.

At the beginning of September, rebels looted several thousand animals from Arab nomads near Malam. This was followed by at least three SLM/A attacks on government towns, resulting in the brief takeover of the Sudanese garrison town of Shearia on 19 September, an observer in the region said.

Observers have expressed concern that the attacks on the villages, as well as the numerous incidents that followed, mark a standoff between the government and the SLM/A – in particular its Zaghawa faction – and constitute a substantial threat to the region’s security.

Many members of the Zaghawa community have received professional military training in the Chadian and Sudanese armies and provide the bulk of SLM/A’s military strength.

The Fur tend to dominate the political leadership of the movement, the International Crisis Group noted in a 6 October report.

SLM/A field commanders said they called the congress because they were worried about the widening rift between their leaders.

Minnawi, who spends much more time in the field, seems to have more support among the military commanders. Nur, on the other hand, had not been in Darfur for over a year, and observers claim he returned for the first time last week, as he feared losing his position on the ground.

Jan Pronk, the special representative of the UN Secretary-General in Sudan, told reporters in Khartoum on Wednesday that the first priority of the international community, following the suspension of the peace talks in Abuja, was to bring the two factions of the SLM/A together.

“You can rest assured that the UN, the international community, the AU and the US are putting a lot of pressure on both wings to come together, to have meetings in Nairobi, in Chad as well as in Darfur so that on 21 November when we have the, hopefully, last round of talks – the seventh round – can be start of a talk whereby all parties are present with an aim to reach an agreement by the 31st of December,” Pronk said.

The Darfur conflict erupted in February 2003 when the two main rebel groups, the SLM/A and the Justice and Equality Movement took up arms to fight what they called the discrimination and oppression of the region by the Sudanese government. The government is accused of unleashing militia – known as the Janjawid – on civilians in an attempt to quash the rebellion.

Some 3.3 million people continue to be affected by the conflict, according to the UN, of whom 1.8 million are internally displaced and 200,000 have fled to neighbouring Chad.

Half of Sudan’s population living below the poverty line: World Bank