Nov 23, 2005 (JUBA) — Cheery tones of African music blare in the colourful Juba market, where business is booming since deminers cleared and reopened a key trade route after a peace deal to end two decades of war in Sudan’s south. 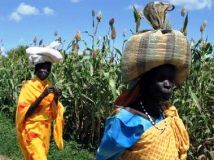 Juba, capital of the south, is now awash with foreign goods from neighbouring countries. Goods like Ugandan pineapples, hair products and alcohol, scarce in the government garrison town since the 1970s, crowd the market stalls.

“I think I’m developing high blood pressure because I cannot believe my eyes at all the things we have here,” said Juba resident Josephine Goj.

“I hope my high blood pressure doesn’t finish me off!” she said, beaming from ear to ear as she said she could finally get good food for her four children.

The town used to be a front line for the bitter north-south civil war, which claimed two million lives and forced more than four million to flee their homes.

Surrounded by army checkpoints and mine-strewn roads, the local economy was strangled and Arab traders ruled the market with high-priced goods flown south from the capital Khartoum.

But Juba is seeing the first tangible peace dividend almost a year after the January deal was signed.

“We are finally seeing peace,” said Andrew Anthony, who had travelled from Yei, 100 miles (160 km) away, to see friends. “This was not possible before.” The Juba-Yei road opened a few months ago, he said.

Kenyan beer, Russian vodka and Ugandan fortified wine were publicly on sale. Islamic sharia law imposed by the northern government had pushed alcohol consumption underground during the war but, since peace, bars have opened in Juba playing modern reggae with disco lighting.

The southern civil war broadly pitted the Islamist government in Khartoum against mostly Christian, animist southern rebels. It was complicated by issues of oil, ethnicity and ideology.

The ex-rebel Sudan People’s Liberation Army (SPLA) formed a southern government in September based in Juba. Implementation of the peace deal has been slow, which had made many southerners question what the peace has brought for them.

But now cooking oil has dropped from 500 Sudanese dinars ($2.08) to 300 a litre. Sugar has almost halved in price and the market is teeming with cars and trucks that link the city daily with Uganda and the Democratic Republic of Congo.

Arab businessmen now have to compete with African traders whose goods, brought in by road, are cheaper.

“Juba was desperate before — there was no food, prices were so high,” said local government official Vincent Kujo Labung. “With the road open, prices have really dropped, now people are eating and we don’t rely on Khartoum any more.”

Trader Sam Toby said the one negative thing was that the lingua franca in Juba was Arabic, but the goods from east Africa were labelled in English. “People don’t have any idea what they are buying,” he said.

“They are reduced to smelling and touching things first.”

He said attacks by the Ugandan rebel Lord’s Resistance Army (LRA), which have stopped U.N. travel, also worried commercial traffic. But, he said, things were much better than before.

Juba has had its fair share of troubles but its atmosphere has turned into one of joy and optimism as it has opened up to the outside world.

“This is really the signing of peace for me,” Goj said.

Bashir calls elections ‘a blow to enemies of Sudan’