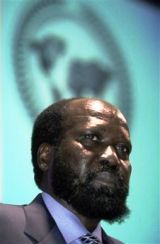 Al-Samani Al-Wasleea, Sudanese state minister at Ministry of Foreign Affairs, told reporters that the visit of the delegation has been very significant and that relations between Eritrea and Sudan hold bright prospects. He also pointed out that additional meetings would be conducted in the coming weeks.

Silva Kiir was received by Isaias Afwerki yesterday, during which extensive discussion were held on bilateral relations and Eritrea’s role in the Sudanese peace process.

During its stay, the delegation held discussions with different Eritrean government and ruling PFDJ officials. It further indicated that the discussion were fruitful.

The two sides agreed to continue their meetings so as to reinforce Eritrean-Sudanese relations to a higher stage.

Also, both sides deceided to foster cooperation in the political and economic spheres, in addition to mapping out programs on implementing agreements already concluded in the aforementioned fields.

The latest discussions between the two sides were a continuation of meetings held last October in Sudan in the course a visit to Khartoum by an Eritrean delegation.

The Eritrean president Isayas Afewerki, has stressed the readiness of his country to play a role which would bring about stability in Sudan. Isayas said Sudan’s unity and security would be positive for Eritrea and the region as a whole.

Sudanese First Vice-President Silva Kiir held talks with the ruling PFDJ Secretary, Al-Amin Mohamed Saeed, the Head of Political Affairs at the PFDJ, Yemane Gebreab, and the Head of Economic Affairs at the Front, Hagos Gebrehiwet, during which the two sides exchanged views on ways and means of further strengthening the strong relations that exist between the PFDJ and the SPLA.

US calls on Sudan to allow humanitarian access in S. Kordofan and Blue Nile