Sudan offeres to withdraw its bid to head African Union

Jan 23, 2006 (KHARTOUM) — Sudanese official offered to withdraw Sudan’s bid to head the African Union to avoid a split among leaders of the 53-nation body gathered in Khartoum for a summit. 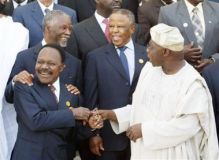 Sudan’s bid to take the helm of the pan-African body had threatened to derail peace efforts in the western region of Darfur where fighting has left 300,000 dead over the past three years.

“If that means Sudan should withdraw, we will withdraw.”

The only official candidate for the AU chair, Sudan had won support from Egypt and Libya for its bid but west African and southern African governments were reluctant to give Khartoum the high-profile position.

Human rights groups had also warned that giving Sudan the AU chair would be tantamount to rewarding a regime accused by the United States of genocide in Darfur and would damage the credibility of the AU, set up four years ago with a new commitment to peace.

Sudan’s offer to step down as a candidate paved the way for a resolution to a row over the AU chairmanship that had overshadowed the summit called to discuss the continent’s problems of war, poverty and disease.

Congo President Denis Sassou-Nguessou was named as a possible contender for the AU chair along with Gabon’s Omar Bongo while Nigerian President Olusegun Obasanjo could be asked to stay on in the post he has held since 2004, sources said.

A working group set up by Obasanjo and led by Botswana had asked President Omar al-Beshir to withdraw Sudan’s candidacy during a meeting late Sunday, sources said.

“There are too many intra-African issues for Sudan to take the chair,” said an official, who asked not to be named.

He listed Darfur, the conflict with Chad and the effort to consolidate peace in southern Sudan following last year’s historic accord ending 21 years of war as the key challenges already before Khartoum.

Darfur rebels taking part in AU-sponsored peace talks in Abuja had warned they would pull out of the negotiations if Sudan was given the presidency of the AU.

In an address at the opening of the summit, Beshir pledged his determination to find a settlement for Darfur and said AU involvement was key to that effort.

“We are happy that the African Union has joined hands with us in order to overcome the crisis in Darfur and extinguish the fire of war there,” said Beshir, who seized power in 1989 in an Islamist-backed coup.

About 300,000 people have been killed and more than two million displaced since 2003 in fighting between Darfur rebels and government forces backed by militias, triggering one of the continent’s worst humanitarian crises.

The AU deployed a 7,000-strong peacekeeping force to the zone in 2004 but it has been unable to put a stop to the bloodshed.

In an apparent reference to the split over Khartoum’s candidacy, Obasanjo urged leaders to spare no effort “to consolidate the achievements already recorded.”

“The project new Africa that we midwife must not be sacrificed at the altar of narrow interests of individuals and groups,” Obasanjo said in his address to the meeting attended by some 30 heads of states.