Mar 10, 2006 (PARIS) — Sudan asked the international community for more aid on Friday to convert a fragile peace accord into benefits for its people, who are some of the poorest in Africa. 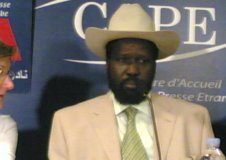 The World Bank agreed Sudan faced a funding gap at a meeting with donors in Paris to discuss the disbursal of $4.5 billion in aid pledged last year to give to the country over three years.

Only $50 million of that money has been spent on development projects with over $1.1 billion being used for more urgent humanitarian needs, largely in the south of the country.

The World Bank puts aid needs at $2.5 billion just in southern Sudan where more than 2 million people have died, mostly through famine and disease, during two decades of war formally ended by a peace deal last year.

“It’s not enough because if it’s $4.5 billion for all of Sudan for three years, and southern Sudan needs $2.5 billion, there is a gap there,” said Gobind Nakani, World Bank Vice President for Africa.

But Nakani said it was difficult to carry out projects in the troubled country, where infrastructure has been destroyed by war and aid workers fear for their safety.

On Thursday, the United Nations refugee agency slashed its 2006 budget for work in Darfur, saying security constraints in the western region had severely limited its operations there.

The aid meeting took place as the African Union held a separate discussion in Ethiopia to consider extending its mission in Darfur until the end of the year to break an impasse over the transfer of peacekeeping duties to U.N. troops.

Donors at the Paris meeting noted the tense situation in Darfur was hurting Sudan’s chances of winning non-humanitarian aid from the international community.

Aid to Sudan is expected to total $1.8 billion this year. Over half of that will be used for humanitarian assistance, leaving limited cash for development projects such as systems to provide drinking water. The donors agreed Sudan’s economy has potential. It grew 8 percent last year and had $647 million in oil revenues.

The south has complained it has yet to receive its share of oil revenues and has criticised the oil ministry for lack of transparency.

The World Bank’s country director for Sudan, Ishac Diwan, said a recent audit by accountancy firm KPMG had largely cleared up confusion about discrepancies in the sum of the oil revenues.

The donors plan to meet again in Sudan in October.