May 7, 2006 (NYALA, Sudan) — The top U.N. humanitarian official called on Sunday for aid workers to be given better access to Sudan’s Darfur region, as agreed in a peace deal to end three years of fighting. 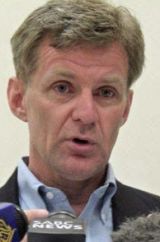 U.N. Under-Secretary for Humanitarian Affairs Jan Egeland, on his first visit to Darfur since he said Sudan barred him from visiting last month, also said he would press rebel leaders to join the peace agreement signed on Friday.

Sudan’s government and the largest rebel group in Darfur, a faction of the Sudan Liberation Army, signed the agreement in Abuja, Nigeria, but two other factions have refused to join.

Three years of fighting between Darfur rebels and the Sudanese government has killed tens of thousands of people and forced 2 million to flee their homes.

Aid workers in Darfur say they face the threat of expulsion and are hindered from providing aid by government restrictions on movement.

The peace agreement calls on all parties to improve humanitarian access to facilitate aid operations.

“In the peace agreement in Abuja, there is unlimited access granted in all Darfur for all humanitarian organisations but this is not the practice,” Egeland said after meeting Salah Mostafa, a deputy governor for South Darfur state.

“We need more resources for humanitarian work from the whole world including the West, Islamic and Arab countries and Asian countries,” Egeland told reporters.

The United Nations said last month it would cut food rations for more than 6 million people in Sudan, half of them in Darfur, due to a severe lack of funds.

A group of about 25 men protested against Egeland’s visit to Nyala, the capital of South Darfur state.

Egeland is Norwegian, and Sudan said one of the reasons he could not travel to Darfur in April was because it could not guarantee his safety.

Last year, the Islamist-dominated government of Sudan made peace with a separate rebel group from the south of the country, where most people are Christian or follow traditional African faiths.

Egeland will be travelling to the rebel held area of Gereida, where he will meet with SLA commanders, NGOs and local officials, before returning to Khartoum to meet government officials there.