May 13, 2006 (PARIS) — The Darfur’s largest rebel faction, who signed a peace agreement with the Sudanese government, said Abuja accord still incomplete. The group demands that Khartoum responds fully to the reservations presented by its chairman. 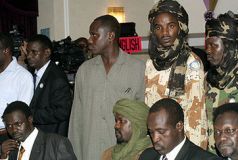 The spokesperson of SLM-Mianwi Faction, Esam Eddine Elhaj, told Sudan Tribune that the purpose of current visit of a delegation led by the SLA chief commander, Jema Hagar, to Darfur is to meet military commanders, and not to popularize the Abuja agreement.

In a telephone interview Elhaj said to finalize the agreement we must fix the formulated reservations about the Darfur Peace Agreement. He further said that the other SLM faction led by Abdelwahed is negotiating with the Sudanese government on similar points and we have to wait the outcome of these talks.

“We wanted the agreement to include a clear mechanism to disarm the Janjaweed militia and define the side that will undertake this job in a clear and frank manner” Esam said. According to him the United Nation must be involved in the Janjaweed disarmament. The expected UN force to Darfur must supervise and verify the operation.

The agreement stipulates that Janjaweed militia has to be disarmed completely by mid-October, 2006, without further indications. The parties of the deal have to agree on the technical aspects. But is seems that rebels groups do not trust Sudanese government and ask for international participation.

On the power sharing, the rebels say the question of the percentage of their participation in the federal government is not resolved. The same thing could be said for their participation in the administration of the national capital Khartoum. Elhaj further added that this representation must be defined in accordance with the percentage of Darfur population.

The spokesperson also raised the question the compensation. He said Sudanese government must compensate fairly the Darfur population, victims of the three years war. “Those people have lost any thing. Now they are surviving thank to international aid”, he explained.

The signed agreement speaks about a commission to provide compensation to victims of the conflict — to be created within 60 days after signing of peace agreement — without determining a clear mechanism. Khartoum had first rejected during the talks the principle of compensation.

Abdelwahed Mohamed al-Nur, leader of the other faction of Sudan Liberation Movement (SLA) has so far refused to endorse a peace deal signed on Friday 5 May by rival SLM factional leader Minni Arcua Minnawi and by the Sudanese government to end three years of bloodshed.

Al-Nur refused to sign for identical demands. Besides the demands presented by Minawi faction, al-Nur asks a vice-presidency for Darfur and calls for introducing languages and local dialects into the curricula in the schools of the region.

Nur wrote to African Union (AU) mediators late on Wednesday asking to reopen discussions with Khartoum and pledging to sign the accord if key demands were addressed in a separate document.

Dying in the dust: a story from Sudan