May 20, 2006 (KHARTOUM) — Dozens were killed in a major attack by government-backed militias on Shearia town in Sudan’s Darfur region, the latest in a wave of raids since a peace deal was signed earlier this month, rebels said on Saturday. 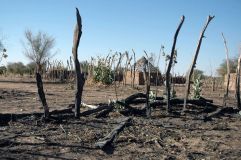 A spokesman for the main rebel faction group who signed the deal in the Nigerian capital Abuja on May 5 told Reuters from the field in Darfur that despite the agreement, heavy attacks have continued on the ground.

“The attack on Shearia was yesterday — the Janjaweed have attacked many many places in South Darfur despite the peace deal,” al-Tayib Khamis said. Shearia is in South Darfur.

“There are about 20-25 dead and many injured but it’s unclear as yet how many,” he said.

The government and the Minni Arcua Minawi faction group signed a peace deal on May 5 under intense global pressure. But two other factions at the talks did not sign saying it was not fair. Thousands of Darfuris have since been demonstrating angrily against the agreement.

Arab militias, known locally as Janjaweed, were not part of the peace talks in Abuja. The United Nations said as Khartoum armed them to fight the mostly non-Arab rebels, the government represented them.

Khartoum admits arming some tribes to fight the rebels but denies links to the Janjaweed, saying they are outlaws.

The African Union, with a 7,000-strong force monitoring a widely-ignored ceasefire in the region, was unable to immediately confirm the fighting in Shearia.

Since rebels took up arms in early 2003 accusing the government of neglect, tens of thousands have been killed and more than 2 million forced to flee their homes.

The Janjaweed stand accused of a widespread campaign of rape, killing and looting, which the United States calls genocide. Khartoum rejects the charge but the International Criminal Court is investigating alleged war crimes.

Shearia is a flashpoint of violence in Darfur as Arab nomadic tribes clash with non-Arab rebel commanders who often use civilian villages as their bases in the region.

Infighting between rebel factions is also common as the boundaries of areas of control are fluid.

Low intensity clashes between local rebel commanders on the ground have continued despite a ceasefire and the peace deal. Communication between rebel political leaders in the peace talks in the Nigerian capital Abuja and military commanders in the field is poor.

AU forces have been unable to protect civilians in areas under their control. On May 8 Arab militias, known as Janjaweed, attacked Labado town in South Darfur, killing and injuring up to 50 people. The AU has a base in Labado town.