May 23, 2006 (KAMPALA) — The southern Sudanese government, gave twenty thousand US dollar to the leaders of Ugandan rebel group to buy food, the Kambala based the Monitor reported Tuesday 23 May. 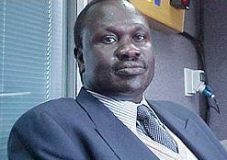 The Vice-President of Southern Sudan government Riek Marcahr has given rebel Lord’s Resistance Army (LRA) leader Joseph Kony at least 20,000 dollars (36m shillings). The move has been variously interpreted among Ugandan security circles with some claiming it is a bail out for Kony.

In a video-taped meeting on 2 May, South Sudan’s Vice-President Riek Machar handed Kony the package that also included several tons of food rations which, according to highly placed security sources in Uganda, is understood to be facilitation towards “a new lease of life” for a much weakened rebel group.

Riek, who was dressed in a white Kaunda suit, reached for his bag and pulled out bundles of 100 dollars bills, stuffed them in a brown envelope and handed them to Kony. “Here is 20,000 dollars to help you buy food not arms not ammunition,” Riek said. The money was received by Kony’s number II Vincent Otti and handed over to another LRA rebel officer.

In the video, Kony, in a green military uniform with red pips, looked healthy and talked in a low tone. “I have no problem with Museveni if it is really possible we can end this war,” Kony said.

Kony appears with over 20 heavily armed guards. Otti, appeared in similar green military uniform and wore old-fashioned spectacles. “They gave the hefty sum of money to Kony in the pretext of buying food but are they sure what Kony is going to use that money for?” a Ugandan security source wondered yesterday.

Sudan’s First Vice-President and leader of southern Sudan Salva Kiir delivered the videotape of the Riek-Kony meeting to President Yoweri Museveni on 12 May. Other sources that watched the DVD that features the meeting said Kony was excited when he received the money. “He got excited and quickly asked where he could change the currency,” a source said.

The meetings were held in a bush near the Sudan-DRCongo border recently. Another source that saw the footage described Otti and Kony as two middle-aged men “dressed in military green fatigues with pips like those for generals”. Kony reportedly said he was willing to resume peace talks with President Museveni, the man he has fought for almost two decades.

The UPDF [Uganda People’s Defence Force] establishment, which had maintained thousands of troops in southern Sudan, said it had knowledge of the meeting but declined to comment on the alleged 20,000 dollars cash donation.

“We were fully aware of the meeting between Riek Machar and Kony but we are not aware whether money changed hands,” said UPDF spokesman Maj Felix Kulayigye yesterday.

Following the delivery of the message, the president is expected to guarantee the safety of the internationally wanted rebel leader if he gives up his 20-year insurgency before the end of July. The International Criminal Court last November issued arrest warrants to Kony and four of his top lieutenants.

The ICC, in a swift rejoinder, reacted angrily saying the new peace offer was undermining the case against Kony, Otti and three other commanders. The court argued that President Museveni must remain committed to his November 2003 referral he made to the court.

ICC accuses Kony and the four commanders of murders, abductions, mass burning of houses, looting of entire villages, massive destruction, enslavement and inducement of rape. Past attempts to negotiate an end to the war have failed, with both the Ugandan government and the rebels being accused of lacking commitment to peace talks.

For years, the LRA have used bases in the lawless mountains of southern Sudan to raid northern Uganda, where the war has uprooted up to two million people and triggered one of the world’s worst humanitarian disasters.

The LRA has no clear political aims beyond opposing Museveni. Last year, a fractious group of its fighters moved from Sudan into the jungles of neighbouring Democratic Republic of Congo.