June 12, 2006 (KHARTOUM) — Eritrea’s president met his Sudanese counterpart in Khartoum Monday in a rare visit aimed at ending almost over a decade of chilly relations between the neighbors who accuse one another of providing assistance to opposition groups across their border. 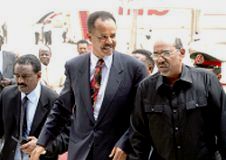 President Asias Afwerki was to talk with Sudanese President Omar Al Bashir about relations between the two countries, and about Sudan’s eastern front, where two renegade groups — the Beja Congress party and the Free Lions — are jostling for a larger share of wealth and power.

Sudan believes Eritrea could play a major role in resolving the dispute because of tribal ties and the influence Afwerki has with leaders in that area.

“We know that even if we resolve the Darfur questions, they will come up with the eastern Sudan question, ” Bashir said last month at a meeting between his ruling National Congress Party and Sudan’s People Liberation Movement.

As the talks continued for than six hours, the Sudanese government expressed optimism over Eritrea’s mediation for resolving the eastern conflict.

“The Eritrean mediator will present his vision on how the problem will be solved when the two sides get together for the procedural session in Eritrea on Friday,” said Ismail.

“Until now, the mediation is only Eritrean … there is no other mediator,” Ismail said, adding that he would led a 10-member Sudanese delegation of national unity to the Asmara talks.

In addition to Eritrea helping end the conflict in eastern Sudan, normalization between the two countries would also likely restart trade over their border, unleashing precious supplies of goods into Sudan.

On Sudanese-Eritrean ties, Ismail said: “We have begun normalisation and confidence-building … Dialogue will remain open to enable the two countries to move forward with their relations.”

On the other hand, the Eritrean President, Assais Afwerki, and the First Vice – President, Salva Kiir, met here Monday and reviewed progress of the bilateral relations and ways to boost the cooperation between the two countries for the interest of the two nations.

They also discussed the implementation of the Comprehensive Peace Agreement and the ongoing efforts to realize peace and stability in Darfur. President Afwerki and the First Vice – President have discussed the preparations for the coming peace negotiations of east Sudan.

Observers believe such normalization would end Eritrea’s isolation and deprive the Eritrean opposition from a main source of support.

U.S. envoy in Khartoum for talks on GERD, Ethiopia