July 4, 2006 (KHARTOUM) — Sudanese First Vice President Salva Kiir will visit Washington to discuss peace implementation and US aid to the southern Sudan besides related questions as the economic sanctions. 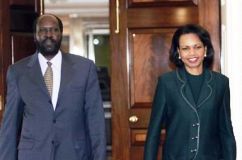 The state minister in the Presidency, Telar Deng, said “Salva Kiir visit to the U.S. will start on 18 July”. He further indicated that Sudanese First Vice President would meet President George W. Buch on Thursday 20 July.

During his last November visit to Washington, Kiir met with Vice President Dick Cheney, US Secretary of State Condoleezza Rice, Deputy Secretary Robert Zoellick and members of the US Congress. This will be the first time to meet President Bush.

Salva Kiir will travel to the U.S. with a request that eight-year-old economic sanctions be lifted and removing its name from Washington’s list of countries sponsoring terrorism. The question of the economic sanctions was already raised during his visit in November 2005 to Washington.

He will also discuss the American aid for the Southern Sudan reconstruction.

Last year visit coincided with the renewal of the economic sanction against the Sudan. Then, Kiir was criticised for not doing enough to persuade the US administration for lifting the sanctions.

Kiir’s visit to Washington will be the second since he took over the SPLM in August following the death of First Vice President John Garang in a helicopter crash.

Opposition figure claims he was blocked from addressing university forum

Peace conference between Lakes and Warrap states begins in Wunlit