July 13, 2006 (NAIROBI) — Clashes between rival factions of a rebel group in Sudan’s western region of Darfur have displaced 8,000 civilians in the past 10 days, United Nations emergency coordinator Jan Egeland said on Tuesday, reiterating his call for the deployment of a UN peacekeeping force in the war-ravaged area. 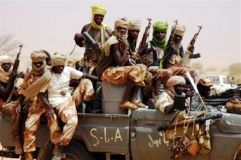 Rivalries between the two factions of the Sudan Liberation Army (SLA) have been exacerbated by differences over a peace deal signed by one of the groups with the government in May.

“It is heartbreaking to see that what the SLA groups had rightfully accused the Janjawid [government-backed militia] of doing, they are now doing themselves to the civilian population caught in the crossfire,” Egeland told a news conference in New York. Government forces were reportedly supporting the attacks against the splinter faction and humanitarian workers throughout Darfur were being attacked “on an almost daily basis”.

The Darfur peace deal was signed by the Sudanese government and one of the three main rebel groups, the SLA faction headed by Minni Minnawi. Abdelwahid Mohamed al-Nur’s faction of the SLA, with the strongest support base among the Fur – the largest ethnic group in Darfur – refused to sign, claiming it did not fulfil his key demands. Fighting between the two SLA factions, as well as targeted attacks against the African Union, which mediated the peace talks, has flared since.

“In Darfur, security is non-existent for the civilian population and non-existent for humanitarian workers,” said Egeland. “I have also received reports that the government is using white helicopters, the same colour that AMIS [the African Union Mission in Sudan] and the United Nations is using. This is a violation of international principles and poses a direct threat to UN and non-governmental organisation staff who normally [use] white helicopters and are neutral and impartial and should not be attacked,” he added.

A member of CARE staff had been killed in the massive Kalma refugee camp, a UN World Food Programme convoy ambushed and looted a few days ago in South Darfur, while the abduction of a national staff member and mounting security concerns had forced Oxfam to suspend operations in two of its six offices in North Darfur earlier this week, Egeland said.

He said AMIS lacked the capacity to effectively protect civilians or provide adequate security for humanitarian operations. “We need a UN force on the ground (…) It is completely unsustainable the way it is now,” he added.

The African Union has extended the mandate of its peacekeeping mission in Sudan until the end of 2006, and Sudanese President Omar Hassan al-Bashir has agreed to the reinforcement of the AU presence, but has fallen short of agreeing to the eventual deployment of a full UN force for the region.

Egeland stressed that nations that had thus far pledged to support a UN force for Darfur were the organisation’s traditional troop contributors, mostly developing countries, and not western states. It was therefore incorrect to state that the UN peacekeeping mission in Sudan would be a “western force and, therefore, should be resisted”, he said.