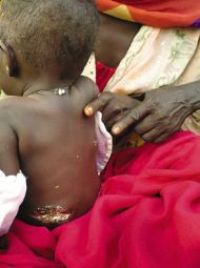 Such action should include imposing sanctions on Sudanese President Omar El Bashir and other senior officials who fail to protect civilians by impeding the deployment of a U.N. force to Darfur.

“Security Council members must make protecting Darfur civilians their highest priority,” said Kenneth Roth, executive director of Human Rights Watch. “The secretary-general has reminded President Bashir and other high-level officials that the ‘responsibility to protect’ means that they will be held personally responsible should their failure to accept a U.N. force result in continuing civilian casualties.”

September 17 marks one year since world leaders agreed on a common responsibility to protect populations from genocide, ethnic cleansing, war crimes and crimes against humanity. Civil society activists are planning a Global Day for Darfur on September 17, with rallies, and other events in dozens of cities around the world to raise awareness and demand action by policymakers.

Human Rights Watch called for the U.N. Security Council to immediately impose asset freezes and travel bans on the highest-level Sudanese officials – including President Bashir – who are failing to protect civilians by impeding deployment of a U.N. force to Darfur.

“With fighting on the upsurge and the possible departure of African Union troops from Darfur on September 30, Darfur’s civilians face the scenario of even more disease, destruction and death if global leaders don’t act now,” said Roth. “A year after the 2005 World Summit agreed on a collective responsibility to protect the most vulnerable, it’s long past time to match action to words.”

Despite a May 2006 peace agreement signed by the Sudanese government and one rebel group, fighting in Darfur has recently increased. The government launched a new offensive in North Darfur in late August while simultaneously resisting international calls for a U.N. force in Darfur.

On August 31, the U.N. Security Council approved resolution 1706, which authorizes a U.N. force of more than 17,500 troops and 3,300 police to be deployed to Darfur, providing that the Sudanese government consents. So far, Khartoum has refused to permit the U.N. deployment and recently threatened to eject the existing 7,000-member African Union force.

Human Rights Watch said that the dispute over the U.N. force has tested the Security Council’s willingness to enforce its own resolutions. Sudan has proved adept at dividing the council, whose members include China and Russia, each with veto power, as well as Qatar; all three have apparently refrained from pressing Sudan to accept the U.N. force.

Under U.N. Security Council resolution 1591, the Security Council can place individuals who violate international human rights and humanitarian law, breech the arms embargo on Darfur, or “impede the peace process” on a list for travel bans and asset freezes.

In April 2006, the Security Council imposed sanctions on four individuals, including one Sudanese military commander, two rebel leaders and one government-allied militia leader. No high-level government officials have been affected, despite the inclusion of several cabinet ministers on a confidential list of 17 persons recommended for sanctions, and five others including President Bashir to be considered for possible future sanctions, by the U.N. Panel of Experts more than nine months ago.

“Condemnation is only half the message to Khartoum,” said Roth. “Sanctions are a vital way for the Security Council to get the Sudanese government to stop abusing its people.”

To view the August 14 letter from Human Rights Watch to the U.N. Security Council on Sudan sanctions and civilian protection in Darfur, please visit: