Sept 15 2006 (YEI) — Over two thousand residents of Yei town took to the streets Friday 15 September to demonstrate against price increases for basic goods after augmentations in taxes on consumer commodities by the federal government. 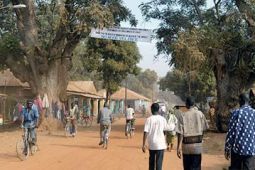 According to an eyewitness story reported by Sudan radio service, the peaceful demonstration was held in the main market street on Friday to protest against the hike in taxes, which has gone exorbitantly very high like for sugar 71 percent, of course cement has also gone up significantly.

“In the last 7 days a group of custom officers who were brought to Yei by His Excellency Arthur Akuein – the Minister of Finance in the Government of Southern Sudan, some were taken to Kaya, and then they decided to come with the new tariffs” the radio reported.

The slogans read like (no more slavery, no more “Jallaba” dictatorship on us; we want to build southern Sudan. Garang we wish you were alive to see what is happening).

The Commissioner of Yei County, Colonel David Lokonga, said the peaceful demonstration was sparked off by increase in taxes on consumer goods. But he said county authorities were doing their best to contain the situation.

An official in the Yei Chamber of Commerce, Samuel Lotigo told Sudan Radio Service that the demonstration paralyzed business in Yei town on Friday.

He said shops and the open-air market remained closed throughout the day. He added that more than 2 hundred lorries loaded with goods from Uganda were on their way back to protest the tax increase.

In Khartoum, the Sudanese security forces fired tear gas and beat demonstrators with sticks on Wednesday 6 September in a crackdown on peaceful protests against price increases for basic goods, after thwarting similar protests a week ago. Around twenty of protest organisers had been arrested and jailed for two months or one month.