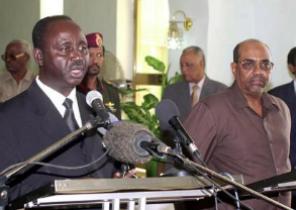 The radio reported that Bozize, who ended on Wednesday a two-day visit to Sudan, met Sudanese Defence Minister Hassan Saleh and discussed conflicts pitting CAR farmers in the northeastern province of Vakaga against cattle herders in southwestern Sudan.

The CAR-Sudan Joint Commission was established in mid-2002 following attacks by armed people allegedly from Sudan who raided and burned villages near the town of Gordil, 1,100 km from the capital, Bangui.

Apart from an inaugural meeting in Bangui in June 2002, delegations of the two countries on the commission have never met on the poaching and ethnic tensions across their common border.

Bozize’s visit was his first to Sudan since he seized power on 15 March from President Ange-Felix Patasse. Prior to his coup, Bozize had led a six-month rebellion against Patasse, with fighting concentrated mainly in the north of the country.

At the beginning of Bozize’s insurrection in October 2002, 30 Sudanese soldiers fought alongside Patasse’s forces within the framework of the Community of Sahelo-Saharan States, which then had a 200-man force in the CAR to protect Patasse.

Following Bozize’s coup, Sudan was among the first African states to send a delegation to Bangui. During the visit by the delegation that was headed by Saleh, Sudan donated military vehicles and equipment to the CAR army.