Oct 4, 2006 (UNITED NATIONS) — The United Nations cannot send peacekeepers to stop atrocities in Sudan’s Darfur region unless a political agreement was in place or no one could find enough troops to patrol the area, the head of U.N. peacekeeping said on Wednesday. 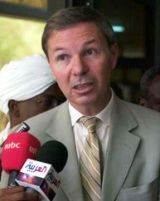 Sudan’s President Omar Hassan al-Bashir has so far rejected a U.N. force to absorb and augment some 7,000 African Union troops and monitors in Darfur where more than 200,000 people have been killed and some 2.5 million driven out of their homes in fighting between pro-government militia and rebels.

Jean-Marie Guehenno, the U.N. undersecretary-general for peacekeeping, said an enormous number of troops “which are not forthcoming” would be needed to patrol Darfur.

“When you try to apply peacekeeping to any kind of situation and confuse peacekeeping with peace enforcement, you run very quickly into great difficulties,” Guehenno said.

Normally, he said peacekeepers would find some basis for law and order based on a political agreement and then “hit hard on anybody who doesn’t really abide by the agreement.”

But he said that anyone “who tells me that a half million square kilometers can be policed, that law and order can be imposed by an outside force … is wrong.”

President George W. Bush has called several times for a U.N. force to go into Darfur, which to U.N. officials could mean the troops would have to fight Sudan’s army, for which there would be few volunteers.

But human rights groups also have said the world body should not wait any longer. Some diplomats as well as Jan Pronk, the U.N. representative in the Sudan, have suggested that the international community should push for a prolonged and beefed up African Union force.

But Guehenno rejected a “Plan B” and noted that the United Nations was helping the AU with trainers, equipment and logistics experts as a prelude to a U.N. operation.

“Our … support package may help create a different set of conditions that will allow to a transition to the United Nations,” Guehenno told a news conference.

Neighboring Chad, which would welcome peacekeepers, would also prove difficult to mount a U.N. operation, he said.

“We are looking at Chad to see what could be done,” Guehenno said, adding that it was “very difficult” and almost as forbidding as Darfur itself.

“I would not want to leave any illusion that a Chad operation would be any easier than in Sudan, in Darfur,” he said. Both countries have fractious rebels and armed gangs, fighting for control of refugee camps.

The conflict began in earnest in early 2003, when rebels took up arms against Sudanese authorities, accusing the Arab-dominated central government of neglecting Darfur.

Khartoum is alleged to have armed so-called Janjaweed militias, drawn from Arab tribes, to crush the rebels. A campaign of murder, looting, rape and arson ensued, now joined by fractious rebel groups and bandits.