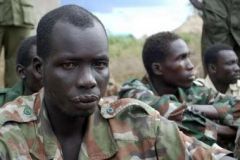 The bus was attacked on Oct. 29 on the road between Juba, the capital of southern Sudan, and the town of Torit, about 110 km (70 miles) to the east, said spokeswoman Radhia Achouri.

“We got the confirmation from local police. … Eight people are also missing,” she told Reuters by telephone.

Almost daily attacks have shocked residents around Juba over the past two weeks, claiming the lives of more than 40 people. The United Nations says it is not clear who is behind them.

The 15, seen by Reuters, are mostly southern soldiers from SAF with one from the western Darfur region. They had SAF identification numbers and wore green khaki military uniforms. Despite the arrests, attacks have continued.

Residents and others have also blamed the attacks on the Lord’s Resistance Army, a Ugandan rebel group which has been active in southern Sudan for many years but has started talks with Kampala. The rebels have denied they are responsible.

In a separate incident in southern Sudan the same day, four gunmen also ambushed a bus near the border with Kenya and the bus driver sustained a gunshot wound, a U.N. statement said.

The attackers demanded money and valuables from the vehicle’s three passengers, who were stripped naked before being released, the statement said.

October 22, 2021 (JUBA)- The South Sudanese government said Friday that protests in Sudan might affect the flow of oil to Port Sudan, and...