Nov 2, 2006 (AL-FASHER) — A crowd of disgruntled soldiers camps outside the office of their superiors at the African Union base in Darfur’s main town el-Fasher, grumbling that they have not received a salary for more than two months. 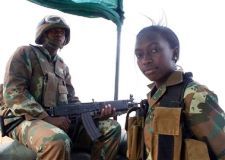 At the airport, soldiers wait all day in the hot sun for planes that never arrive.

At the AU base in Abeche, across the border in Chad, AU soldiers cut off from their central command by poor communications stand outside the U.N. refugee agency office to use the Internet to send in reports.

Soldiers there said although money is deducted from their pay for food, they don’t get any. Earlier this year an AU soldier shot his officer because his wages had not been paid.

And then there are problems with corruption, soldiers said.

Last month two AU vehicles were caught being loaded onto a plane headed to Nigeria.

“We don’t call this AMIS, the African Mission In Sudan, we call it ABIS, the African Business In Sudan,” said one officer, who declined to be named for fear of losing his job.

Western donors who fund the AU mission blame a lack of cash and equipment for the mission’s inability to stabilise Darfur.

But the soldiers tell a different story. They say the money is there, but poor management and logistical weaknesses in the AU’s first major peacekeeping foray means the cash is often lost.

The AU blames the problems on Sudan’s weak banking system.

“There is a management failure here,” said the soldier, who said he has not been paid for two months and has camped in el-Fasher every day for three weeks asking for his money.

Officer Albert Mboumba has been waiting since Sept. 6 to be paid so he can go home.

“If this continues they will face a very serious situation, because people may become undisciplined,” he said.

Tens of thousands of people have been killed in a 3-1/2 year revolt in Darfur that has forced 2.5 million others to flee their homes and created what U.N. officials call one of the world’s worst humanitarian crises.

But more than two years after the mission began, violence has increased, with fractious rebels fighting each other. Despite an AU-brokered peace deal, a new rebel alliance has renewed hostilities with the government.

Khartoum rejects a U.N. Security Council resolution to transfer the AU mission to a U.N. peacekeeping force, likening it to a Western invasion.

But many AU soldiers themselves say they want the United Nations to take over their mission to sort out the shortcomings.

All over the el-Fasher base unhappy soldiers complained about the conditions, the money problems and many said they wanted to go home. “This African mission should be cancelled, we are useless,” one shouted at journalists who walked past.

Donors have paid directly for the AU’s new office in Khartoum to house the staff heading up the implementation office, instead of passing the money through the AU accounts.

“The AU themselves asked for this because it’s the only way to guarantee all the money gets here,” said one Western diplomat.

Meanwhile, at the AU check-in desk at the airport, Nigerian women lug huge boxes of goods to take to their bases despite protests from the air operations staff.

Those goods sell well in Darfur.

US Bush should press Sudan to implement promised reforms- HRW