Nov 15, 2006 (NEW YORK) — The African Union, United Nations and key governments must immediately bolster international forces in Darfur and increase pressure on Sudan to halt the spiral of militia attacks on civilians in Darfur and Chad, Human Rights Watch said today. On November 16 and 18, members of the UN Security Council, key AU member states and UN officials will meet in Addis Ababa to discuss the deteriorating regional situation, and proposals to bolster the AU mission in Darfur. 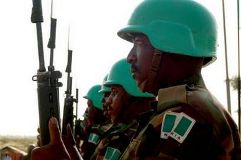 Since late October, Human Rights Watch has documented several incidents of indiscriminate aerial bombing of civilians in northwestern Darfur and Chad by Sudanese government forces. Human Rights Watch has also collected dozens of accounts from survivors of a wave of militia attacks in Chad over the past few weeks. Victims of the militia attacks in southeastern Chad consistently state that groups of Chadian Arab nomads have been newly armed and are responsible for many of the attacks, which have killed and injured hundreds of civilians.

“We’re seeing a regional war against civilians, with armed groups on both sides of the border actively supported or tolerated by the Sudanese and Chadian governments,” said Peter Takirambudde, Africa director at Human Rights Watch. “The high-level meetings in Ethiopia must produce a clear plan for immediate deployment of international troops to protect civilians in Darfur and eastern Chad. The force should also monitor and enforce the arms embargo in Darfur.”

Chadian militia groups have attacked dozens of villages in southeastern Chad over the last 10 days, killing several hundred civilians, injuring scores of people and driving at least 10,000 people from their homes. In a wave of violence that is sweeping through rural areas, villagers are defending themselves with spears and poisoned arrows against militia groups of Arab nomads armed with automatic weapons. A clear pattern has emerged in which Chadian Arab militia groups are targeting non-Arab villages in southeastern Chad.

Militia groups attacked as many as 60 Chadian villages separated by several hundred kilometers of rugged terrain on November 4-5 and in the week that followed. The militias then loot the villages that have been cleared of civilians.

In some instances, villages are attacked or destroyed but not looted, suggesting the motive is not robbery, and the level of brutality is rising. Human Rights Watch documented several attacks where militia members mutilated men in their custody and deliberately burned women to death.

“Political and military incursions from Darfur are inflaming underlying ethnic tensions in Chad,” Takirambudde said. “The widespread attacks in Chad suggest that these are not merely instances of localized, spontaneous conflict, but may be part of a coordinated campaign by Chadian militias to remove civilians from key areas.”

Relations between Chad and Sudan have sharply deteriorated in the past year since the Sudanese government increased support to Chadian rebel groups based in Darfur. Darfurian rebels also continue to maintain a presence in eastern Chad, despite several agreements signed by both governments to cease support to insurgency groups.

While the Sudanese government’s policy of recruiting, arming and supporting ethnic “Janjaweed” militias in Darfur over the past three years has been well documented by Human Rights Watch and other agencies, it is unclear whether the newly mobilized and armed Chadian militias are receiving support from Khartoum.

Human Rights Watch called on the African Union, members of the UN Security Council and other key governments, including Egypt and Libya, to ensure that any international force deployed to Darfur and Chad has a robust mandate to protect civilians and sufficient capacity to deter further attacks. Human Rights Watch also called on the UN Human Rights Council to hold a special session or to devote a full day of its upcoming third session to address the worsening situation in Darfur and Chad.

“A strengthened international force in Darfur and Chad is an essential first step to stopping the violence,” said Takirambudde. “But to be effective, the force must have strong international backing and be accompanied by sustained pressure on Khartoum to reverse its support for the militias.”

Background on the attacks in southeastern Chad

At least three different areas of southeastern Chad, all located around the town of Goz Beida, a center for humanitarian aid operations, have experienced massive militia attacks in the past two weeks: the Kerfi area southeast of Goz Beida; the Koloy area north of Goz Beida; and the Bandikao area south of Goz Beida.

Local authorities in the Kerfi area, southeast of Goz Beida, report that 62 civilians were killed in the past week in more than a dozen villages by Arab nomads who have lived in the area peacefully for years, but who returned at the end of the rainy season armed with automatic weapons and wearing military uniforms to carry out attacks against non-Arab villages. Local authorities assert that these Chadian Arab groups are receiving material support and sponsorship from inside Sudan, though they are not able to provide evidence in support of their assertions.

Militia attacks have also taken place north of Goz Beida, in the Koloy area, as recently as November 12. Koloy had been a major gathering place for internally displaced persons fleeing violence closer to the border early this year, but civilians began leaving Koloy after surrounding villages came under attack in May. Arab militias attacked Koloy several times in the past week, including on November 12. On November 13, civilians attempting to flee Koloy were pursued by gunmen, who followed them to within eight kilometers of the town of Adé.

In Bandikao, a village 90 kilometers south of Goz Beida, Arab nomads who pass through the area each year at the end of the rainy season killed 56 people and wounded another 41 in violence that stretched over a two-day period, beginning on November 4. Although there has been violence between nomads and resident farmers in the past, witnesses told Human Rights Watch that the current attacks are far worse than in any prior year.

Villagers from Bandikao interviewed by Human Rights Watch at a local hospital said that the village chief was executed by militia men, along with two others, on the afternoon of November 4. Armed with bows and arrows and machetes, men from the village tried to retrieve the bodies and were ambushed and massacred. Men from surrounding villages armed with poisoned arrows arrived to do battle with the Arab nomads, who cut them down with automatic weapons.

Many more men from Bandikao were killed attempting to retrieve the bodies of the dead and save the wounded. Many of the men who were wounded during the day but could not escape from the battlefield bled to death before they could receive medical attention. Of the wounded who were retrieved, seven died later of their injuries. Because of insecurity on the roads, the wounded of Bandikao were cut off from aid until November 14, when a Chadian army force opened the road and evacuated eight men to a local hospital.

The attack on Koloy was on Tuesday, November 7 at 11:45 a.m. I was at home, and the Janjaweed came to the fields. I went out and they were shooting. Some were in uniform, some in civilian clothes, and some were from Sudan. I saw someone I knew during the attack – Hamid Bugdoum … He was Chadian Arab. I knew him mostly because I saw him in the market, maybe for the first time six or eight years ago. We drank tea. Then he left, I don’t know when, but I stopped seeing him. And then I saw him on Tuesday. I was astonished to see him there. We used to be close before, but now his character has changed, he is complicit with his Arab brothers, and transformed into a Janjaweed.

On Saturday [November 4] they attacked us, and Tuesday [November 7] and yesterday, Saturday [November 11]. It’s a mix of Chadians and Sudanese. The injured hid in the trees. I saw some wearing khaki uniform. It’s the same Arabs that killed in Koloy. The Sudanese, before, they came to the market in Koloy and Modoyna, so I know what they look like. … The Chadian Arabs; some were with us before in Modoyna, then they moved to Sudan. I was in the fields, and I heard gunshots in the village. I came to the village and got my baton. I was shot in the right arm while trying to escape. … There were a total of six dead and eight wounded, including two women. They tied two women up and burned them in their house – they wanted to steal the blankets and the women begged them not to. Dekya Dokosheh was one of the women.

Some of the wounded were not dead. Their family members went out to get them and were killed. I went to get the body of the village chief. He was my brother. He was killed at 13:00, and I arrived at 14:00 hours. I came with arrows. We’re farmers; we have no automatic weapons. The Arabs were hiding in the trees. They were shooting anything that moves. I came with seven or 10 others. Of them, Osman Abakar, Musa Adam and Musa Usman are now dead. I was wounded with one other. The rest escaped. At night we regrouped. They came out to get me. From 20:00 hours to 2:00 a.m., the men of the village tried to recover the bodies of the dead and to save the wounded. Forty were killed at night. Many of the men who were wounded during the day but could not escape from the field of battle bled to death during the day and then the night. Of the wounded who were retrieved, seven died later of their wounds. A total of 40 were buried outside the village and 17 left behind, still unburied. The village chief was buried, but many died trying to recover his body.

– A 31-year-old man injured in Bandikao

For more information regarding these photographs, please contact Ella Moran at [email protected]