Nov 23, 2006 (ADDIS ABABA) — The Ethiopian premier, Meles Zenawi, has urged the country’s parliament to “officially state” its stance in regards to Somalia’s Union of Islamic Courts, who he said present a “clear and imminent” danger to his country. 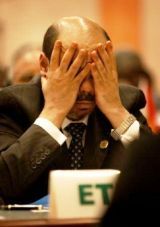 He said his government was taking the “necessary” preparations to confront the Islamists.
Nonetheless, he stressed the need to negotiate first with the Islamic courts before turning to other options.

Zenawi disclosed that his government tried to engage talks with the Somali courts but all these attempts had failed. Because of this impasse the government has taken all the necessary preparation to defend the country, he added.

The prime minister, who was answering questions in parliament on Thursday, claimed that Eritrea was supporting the Islamists. He pledged that Ethiopia was committed to peaceful resolution of its dispute with the Islamists.

The following is an excerpt from Zenawi’s presentation broadcast in Amharic live by Ethiopian TV on 23 November and translated by the BBCM.

Asked by the MPs about the resolution of the dispute among the Somalis, and the attacks and threats being directed by Somali Islamists against Ethiopia, Meles said if the Islamists opt for peaceful resolution of the inter-Somali crisis then the problem with Ethiopia would be resolved.

“The threats being directed to our country from Somalia affect the Ethiopian government and people. The two issues [Somalia’s internal crisis and threats against Ethiopia] are both intertwined and different. This is the foremost issue that we must consider when reviewing the Somali issue;” he concluded.

The second point is the clear and current danger being directed against Ethiopia by the jihadist group heading the union. We say this for several reasons:

First, this group has already declared a jihad on Ethiopia. It declared the jihad publicly and not secretly. It has made the declaration not once but several times. By publicly and regularly declaring this jihad, it presents clear and imminent danger to Ethiopia.

Secondly, this group has declared that it will unite all Somali-speaking people found in the Horn of Africa under its jihadist government. This declaration does not concern Ethiopia alone. It also concerns Kenya and Djibouti, in addition to Ethiopia. The Ethiopian people have the right to decide their destiny as enshrined in the constitution. However, if a group from a neighbouring country vows to forcefully annex parts of Ethiopia into its territory, this is not only a violation of international rules but also presents a clear and imminent danger to the peace and sovereignty of Ethiopia. This declaration was not made in secret but in public. It was also not issued once but several times.

Thirdly, this group is also carrying out direct attacks on our country by giving shelter, training and arming anti-Ethiopian elements. It has also helping them cross into our country. We are not the only ones saying that this action, this crime, is being committed. A report by the UN envoy [to Somalia] has also stated it clearly.

Fourthly, it is known that this jihadist group is not only carrying out its dangerous attacks on Ethiopia relying on its own resources, but is doing so in collaboration with the Eritrean government and other anti-Ethiopian forces. This is not being done secretly but in public, and every body is aware of this. This was stated in a recent report by the UN. By attacking Ethiopia, in collaboration with other anti-Ethiopia forces, this force is increasing the danger being posed to Ethiopia.

An Ethiopian government delegation has made several efforts to meet these jihadists, who have declared a jihad on our country, in a bid to explain and caution them on their stand [on Ethiopia], and also stop launching attacks on Ethiopia.

However, these attempts have not succeeded. I will repeat it, even though it looks as if the 11th hour has passed – we are not going to relent from trying to tell these people to stop their attacks against Ethiopia. This is the foremost and best option for the Ethiopian government.

We should also carefully review what we would do if the government’s option to peacefully resolve this problem does not succeed. As it is evident to all, and according to international law, any country has the inalienable right to defend itself without seeking permission from another. This is in the face of clear and present danger. It has the right to take any reasonable action. It cannot use excessive force, but any country has the right to take reasonable action which cannot be given or denied by another country.

The second option is to make the necessary preparations in order to implement this right. In this regard, the government is undertaking the required preparations. Even now, the government’s option is to stop the attacks posed to our country by the jihadists through dialogue. We do not believe that the option of peace has been exhausted, even if the 11th hour is over. We believe and must push to the end until the peace option is totally exhausted.

However, we cannot sit and watch with our hands folded hands and legs crossed hoping that the problem will be solved through advise or dialogue. We have, therefore, made the necessary preparations. Hence, the future policy of the government will be to take reasonable action in line with international law so as to combat the clear and present danger being posed to our country and safeguard the peace and stability of Ethiopia.

At this juncture, I have a strong belief that it will be of great benefit if this parliament officially decides on whether to support the line of using all peaceful avenues in resolving the problem, or taking the necessary and reasonable legal action if the attacks continue.

I, therefore, urge this parliament to officially state its stance in regards to this issue.