Nov 29, 2006 (ABUJA) — African Union leaders are due to meet in Nigeria’s capital Thursday for talks on the latest plans to end conflicts in Sudan’s Darfur region and neighboring Chad that are taking heavy humanitarian tolls, a Nigerian official said. 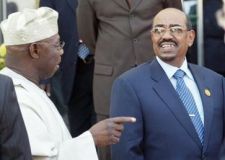 Chadian President Idriss Deby had also been expected to attend, but officials there said Deby was staying in N’Djamena to meet with French Prime Minister Dominique de Villepin, who was to visit Chad Thursday.

Radio Chad said the country would be represented by Minister of State for Territorial Administration Nouradine Kasire Delwa.

Sam Ibok, who is overseeing a May peace deal on Darfur for the African Union, said the meeting of the A.U.’s Peace and Security Council would discuss an A.U. and U.N. proposal to bolster the 7,000-strong A.U. peacekeeping force with U.N. troops, bringing the total number of a “hybrid” mission to between 17,000 and 20,000 soldiers.

“This meeting is to take a decision on whether this is acceptable to the government of Sudan,” Ibok said.

The gathering will “take a decision on what happens after Dec. 31,” when the A.U.’s peacekeeping mandate in Darfur expires, Ibok said.

Sudan, the U.N. and the AU agreed this month to create a hybrid mission using both U.N. and African troops to help restore peace in Darfur. Three years of fighting between government and rebel forces in that western region of Sudan have caused the deaths of more than 200,000 people and forced some 2.5 million from their homes.

The violence has spilled into neighboring Chad to refugee camps hosting displaced people from Darfur and helped fuel a rebel war against Deby’s government.

Al-Bashir has repeatedly rejected a U.N. Security Council resolution from August that scheduled 20,000 U.N. peacekeepers to replace an overstretched African peacekeeping force when its mandate runs out in December. But he recently indicated willingness to consider ways the U.N. could help the African force.

U.N. Secretary General Kofi Annan said Tuesday that he expected the Abuja meeting to push ahead with the combined force in Darfur.

Annan said he spoke to al-Bashir, who promised to respond on Wednesday to key outstanding issues including the size of the force, the appointment of a high representative reporting to both the AU and the U.N., and the selection of a force commander.

Al-Bashir defence team calls for his release on bail