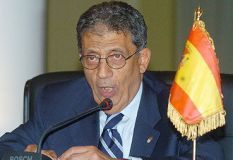 “He also said he would try to have more money in coming months,” a spokesman for EU Aid Commissioner Louis Michel said after talks between Michel and Musa in Brussels.

Michel has vowed to put pressure on donors to make good on pledges to the AU operation after announcing this week that the EU Commission had no more money available for it.

The EU executive has so far given 242 million euros ($313 million) to the AU’s Darfur peace mission and 360 million euros for humanitarian aid. EU foreign ministers this week also urged other donors to make good on pledges.

Experts estimate 200,000 people have been killed and 2.5 million driven from their homes during the 4-year-old conflict Washington calls genocide, a charge Sudan denies.

The ill-equipped AU force has failed to stem the violence and protect aid workers. African officials say the force does not have the manpower, money or equipment to do the job.

The EU is among those pushing for Khartoum to accept a U.N. plan for a hybrid African Union-United Nations force in Darfur.

Both Michel and Musa plan to meet Sudanese President Omar Hassan al-Bashir at the AU summit and urge him to follow up on remarks in December in which he appeared to accept the principle of a coordinated AU-UN presence in Darfur.

Musa also backed Michel’s insistence that further funding for African peacekeepers in Somalia be only made available if the interim government there reaches out to Islamists and other parties in the quest for peace, Michel’s spokesman said.

The Addis Ababa “Conclusions” on security for Darfur: A diplomatic travesty