Jan 26, 2007 (ADDIS ABABA) — Conflicts in Sudan and Somalia are among the crises competing for attention – and troops and funding for peacekeeping operations – at an African Union summit which begins in Addis Ababa Monday. 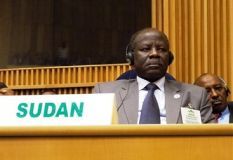 The new U.N. secretary-general, Ban Ki-moon, is including the summit on his first official tour, underscoring the importance which global leaders place on helping the 53-member union address the continent’s problems.

Other foreign guests include: Prime Minister Romano Prodi of Italy, a former colonial power in the Horn of Africa and one of the main Western players in Somalia; the European Union’s development head, Louis Michel; and Jendayi Frazier, the U.S. State Department’s top official on Africa.

Sudanese President Omar al-Bashir and Ban were expected to meet Monday, the opening day of the two-day summit.

The U.N. has pressed for a 7,000-member A.U. peacekeeping force to be replaced by a more powerful, 20,000 U.N. force in Sudan’s Darfur, where civil war has resulted in an estimated 200,000 deaths and forced more than 2.5 million from their homes. Al-Bashir has resisted large-scale U.N. intervention, even as Darfur’s four-year war spills over the border, aggravating rebellions in Chad and the Central African Republic.

The conflict has created a delicate issue within the AU. Sudan is again due to assume the rotating A.U. presidency, after being forced to step aside because of Darfur. The Sudanese government is accused of unleashing an Arab militia against civilians in a campaign of killings, rapes and arson in Darfur. The government denies the allegations.

“In the past year, Khartoum has refused to make any genuine efforts to reverse its abusive policies in Darfur,” said Peter Takirambudde, Africa director at the international watchdog Human Rights Watch. “Awarding Sudan the chairmanship would not only reward the sponsors of crimes against humanity in Darfur, it would irreparably discredit the A.U.”

Somalia, where Ethiopia and the U.S. recently took military action against Islamist extremists, is vying with Sudan as the major issue before the summit. The Horn of Africa nation is slowly emerging from 16 years of warlord-fueled anarchy.

An internationally backed government is struggling to assert authority. It needed Ethiopian help last month to wrest the capital from a movement that had vowed to bring Islamist rule to Somalia by force. The U.S. then carried out air strikes against accused al-Qaida terrorists whom the Islamist movement was believed to have harbored.

Ethiopian troops have started to withdraw, and many fear that will leave the government vulnerable. The A.U. recommended deploying about 8,000 African peacekeepers for a six-month mission that would eventually be taken over by the U.N. But significant obstacles stand in the way, including getting countries to agree to send troops.

So far, only Uganda, Malawi and Nigeria have volunteered troops. Details on which other nations might contribute could emerge at the summit.

South Africa was unlikely to commit to sending troops, but there could be “other means and ways by which South Africa can support this mission in Somalia,” Defense Department spokesman Sam Mkhwanazi said Friday.

South Africa says its military is overstretched, with 3,000 of its troops deployed as peacekeepers in various African trouble spots -including Darfur. Other African countries have raised the same issue. There is also a reluctance to become entangled in a volatile country where U.S. and U.N. peacekeeping operations failed in the early 1990s.

The international community, led by the U.S., has pledged US$40 million to help Somalia.

Also to be announced at the summit is the successor to A.U.’s chief executive, currently former Malian leader Alpha Oumar Konare, who is due to step aside in July. A leading candidate to take over for the next four years is former Mozambican President Joachim Chissano.

Egyptian troops to leave for peacekeeping mission in Darfur

The dirty hand of Qatar in Sudan’s conflicts