Feb 7, 2007 (WASHINGTON) — President George W. Bush has approved plans for wide-ranging financial and other sanctions against Sudan if Khartoum does not follow through on a deal to deploy UN-led peacekeepers to its troubled Darfur region, a senior US official said. 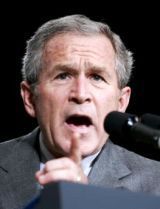 The official, speaking on condition of anonymity, also accused Sudanese President Omar el-Beshir of pressuring fellow African leaders not to contribute troops to the 20,000-strong African Union-UN force that should be sent to Darfur under a UN-brokered agreement.

The Bush sanctions package is part of a three-tiered “Plan B” of coercive steps that Washington has repeatedly threatened to launch if Beshir’s Arab-led government does not halt a campaign of repression unleashed to halt an ethnic African rebellion that has left 200,000 dead and 2.5 million homeless in Darfur since 2003, the official said.

Under the plan, first reported in The Washington Post newspaper, the US Treasury would block US commercial bank transactions connected to the Sudan government, including those involving oil revenues — a delicate diplomatic issue given that China buys some 75 percent of Khartoum’s oil exports, the official said.

The aim would be to discourage foreign governments and companies from doing business with Sudan, which has a largely dollar-based economy.

The package would also put pressure on Darfur rebel leaders who have refused to participate in peace talks with the government.

While Washington has held off on implementing most elements of the package it first threatened to launch on January 1, it has already stationed four US army colonels as observers on Sudan’s border with Chad as a signal to Khartoum not to let the violence spill over into the neighboring country, the official said.

Washington is also considering imposing a “no-fly zone” over Darfur to prevent attacks by the Sudanese air force, he said.

As news of the sanctions plan emerged, the State Department complained Wednesday about the unwillingness of fellow UN members to contribute troops to a planned peacekeeping force for Darfur.

“We have gone out to capitals, we have called in people here in Washington,” McCormack said. “I don’t want to name names right now, but now is the time for them to step up.”

Beshir’s government agreed in principle at a meeting in Addis Ababa last November to a three-phase plan to deploy a hybrid AU-UN force to Darfur after months of refusing to permit UN peacekeepers into the region.

But so far only the first phase of the deployment involving a small number of UN technical experts has been implemented and there is widespread skepticism about Beshir’s willingness to follow through with the rest.

US officials said it was critical that a full UN peacekeeping force be stood up so that Beshir’s intentions can be tested and sanctions be employed if he balks.

“He needs to be tested and that’s why it is critical that member states step up to the plate,” one senior official said.

“You can continue to pressure Sudan, but you need some more leverage. That added leverage comes from actually having a deployable force,” he said.

The official said Beshir had been pressuring fellow African leaders not to provide troops for the UN-led force so the issue would not come to a head.

The official specifically mentioned South Africa as a key country which was able but not yet willing to provide peacekeepers.

He said European and other governments were also being pressed to provide “enabling forces” like engineers, communications experts and other logistics elements to the peacekeeping force.

US activists campaign for Bush support to ICC Darfur case

Hundreds mark “A Day for Darfur” with White House rally