Feb 23, 2007 (N’DJAMENA) — Actress Mia Farrow on Friday called for UN peacekeeping troops to be deployed in eastern Chad to protect refugees there after she made a five-day visit to the region. 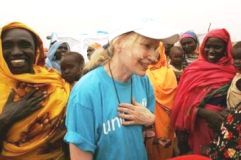 “From the people I spoke to the message was so clear. Again and again – even above the need for water which is so crucial – the plea was for protection,” said Farrow, a goodwill ambassador for the United Nations Children’s Fund UNICEF.

Tens of thousands of people in eastern Chad have been displaced by an uprising against President Idriss Deby’s government and by violence from across the border in the Sudanese region of Darfur.

The U.N. Security Council is due in the coming weeks to consider sending troops to eastern Chad to protect internally displaced Chadians and thousands of refugees from Darfur.

Farrow was in the Chadian capital after visiting refugee camps in the landlocked state’s desolate east, at the end of a two-week tour of central Africa. It was her second visit to eastern Chad.

The actress said she believed the Security Council would support a peacekeeping force, but she criticised the United Nations’ peacekeeping department for dragging its feet.

She also said UN troops should also be sent into Darfur, where more than 200,000 people have died in a rebellion in the last four years.

“It’s way overdue — with or without the consent of the Government of Sudan — and I say this not as a UNICEF representative but as a human being,” she said.

The Sudanese government is accused of arming an Arab militia to crush the uprising, which it denies. Washington has dubbed the conflict “genocide