Feb 26, 2007 (TORIT) — The Government of Southern Sudan (GoSS) and the Government of National Unity are not responsible for inter states roads rather it’s the state governments who are responsible therefore, do not wait for Goss to come and do it for you, said Riek Machar. 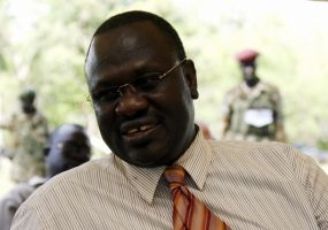 You the governor’s are to work hard and ensure that you open your state roads together with your feeder roads are operational for effective development. “Even if you have to go down to the old methods of opening roads, please do so particularly roads that link your counties” pleaded GoSS Vice-President, Riek Machar.

Presiding over the official opening of Commissioners –Governors Conference, Monday at Eastern Equatoria state Assembly hall in Troit, capital of Eastern Equatoria state, the Vice-President of government of southern Sudan, Riek Machar said “Some of you are waiting and thinking that GoSS will come and do work for you, but I would like to assure you that the government only deals with commercial variable lifeline roads such as Juba -Nimule road that links south Sudan with Uganda”. What is expected of you is service delivery to the people you governed and it must be based on articulate budget proposal;” he added.

The vice-president told governors of the greater Equatoria to take care of their employees because they are at the different levels of government because the current system is of a federal structure. Therefore, you at the level of state you are responsible for your employees whose salary should not come from the government of southern Sudan but from your revenue collection, declared Riek Machar.

Do not relay on the grants, because if you are waiting on grants, you are waiting on what the GoSS is going to give you .Be assured that the resources are with you and collect the revenue. Otherwise, what is due to you from GoSS would come but it will be less for you to run your state government. Some of us even in the government of southern Sudan are still thinking centralized that it’s the GoSS who gives the money to the state.

Machar cited the budget proposal of Lakes state as being clearly focused at 40 million dollars that included revenue collection by the state during a financial year. “And I think they can implement their budget because they clearly expelled out what they could generate and achieve in a given time frame,” adds Riek Machar.

Meanwhile the northern Bhar el Gazal made its budget at the tune of 288 million and they were mostly relying on the GoSS to give them their stated amount. We have to send back to redo it.

Equally, Unity state had prepared their budget at tune of over 500,000 million dollars, also basing it from grant from GoSS.

As for the three states of Greater Equatoria, Riek Machar says they are more stable because it has been connected to neighboring countries where they could conduct border trades addition to their resources.

He urges the three governors to develop their resources than relaying much on budge that comes from GoSS. Vice president Machar cautions state governors who might have over recruited employees to rethink twice because such could create insecurity in the affected state.

He acknowledge the work of UNMIS and other NGOs involved in landmines clearing in the war affected areas of southern Sudan that population in Magwi county, the most mined county during the 21 year’s of war are now coming back. However he noted that Jungle state, Malakal and Bor major and feeder roads need to be demined.

Responding to remarks by Governor Ojetuk of Eastern Equatorial state that peace talks facilitated by GoSS has not made headway, Vice president Riek said at the beginning GoSS was soldering all expenses but later in November 2006, international community came and ask Goss to continue mediating on the issues of northern Uganda.

He said there were 14 countries that came to GoSS aid by putting their resources together through OCHA for the support of LRA peace talks. He further said four countries put there resources to support the assembling areas at Owinykibul and Riikwnba, while another three countries said they would support the cessation of hostility monitoring team.

“We had been working this time to persuade the LRA to come for peace talks and they at first said they are returning on Monday last week, later postponed it to Wednesday and finally on Friday they declared not return to Juba peace talks” says Machar.

On the other hand, Riek Machar said an all Acholi conference is scheduled to convene in Juba, capital of southern Sudan, and, that the paramount chief of Acholi is to lead 150 delegations to pursuing peaceful dialogue with government of southern Sudan starting from March 1st to 3rd 2007.

The chief mediator who is also the vice president of GoSS has finally consented that LRA has created difficulties on the roads and within civil population of southern Sudanese. He further disclosed that LRA has actually never assembled in their designated areas at Owinykibul.

The LRA took the first delivery of foods but the second and delivered of food are still at Owinkibul and at Panyikwar areas and instead preferred looting food from civil population. Machar finally said Juba venue is still open for LRA if they are interested in peaceful solutions to their problems with the Ugandan government.

The pastoralists Amboror who penetrated into Mudri area, though are accused of creating insecurity, we found out that they Amboror have no a single gun, South Sudan government Vice President said.

Therefore, the 91 Amboror killed and 16 went missing are innocent. “To me, those Amboror who have been killed in the process are innocent people. These are people who escape wars like anyone of us did during our hardest period in the Sudan. In fact, Riek Machar said, Amboror were in search of safety and protection of their families and properties” He said the first group of Amboror pastoralists has now moved to unity state to rejoin with their fellow Amboror in the state.

Machar said there are also some armed groups of Murahilin in western Bhar el Ghazal called Al Sushan, who are part of the former government during war time and that some Janjaweed were involved in the war of Darfur.

Earlier the host Governor of Eastern Equatoria state Ojetuk outlined the problems facing his state with spillover to Central and Western Equatoria as being the LRA insurgency who had been ambushing and burning cars on the roads. He also said proliferation of small arms in the states is the cause of cattle raids and sometime unnecessary killing of innocent people.

Governor Ojetuk observed that local government structures are still weak and lack capacities especially on the law enforcement agents that are filling with untrained and ill equipped.

Ojetuk says the coming census is vital for planning at all level, therefore he appealed to GoSS and other NGOs to assist in repatriating southern Sudanese in the refuges camps including IDPs in Khartoum.

This conference, the first of it kind, came seven years after the first gathering of greater equatorial that took place in Yei town in the year 2000.

However, the Yei famous Equatorian conference was mostly attended by those who hails from SPLM/A administrative areas and some representative from Diaspora and those dearing to speaks the truth even when in the den of a lion, government controlled areas.

Southern Sudan Peace commission in collaboration with Private Agencies Combined Team (Pact) organized the conference that is to run one week. Participants were drawn from the three states of greater Equatoria, representatives from Goss and Gonu government and local and international non governmental organization including members of the forth estate.

Over 3100 child-soldiers are now demobilized in South Sudan: UNICEF