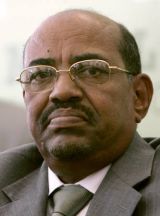 Ambassador Abdalmahmood Abdalhaleem said that he delivered Beshir’s response to a letter sent by Ban in January seeking permission to send over 2,300 UN troops in Darfur ahead of the deployment of a larger joint African Union-UN force.

“Sudan has always supported UN logistical and technical support to AMIS (the African Union force in Darfur). But some of the proposals (in Ban’s letter) are not consistent with the Darfur peace agreement (DPA),” he noted.

Khartoum signed the peace accord last May with one Darfur rebel faction, but other factions declined to sign on to the deal and the conflict has raged on, and even intensified according to humanitarian aid groups.

The Sudanese envoy proposed that a tripartite commission grouping Sudan, the AU and the UN meet to resolve the issue and ensure that the UN plan is aligned with the DPA.

The 2,300-strong force proposed by Ban is meant to lay the groundwork for deploying a joint AU-UN force of more than 20,000 peacekeepers to replace 7,000 ill-equipped and cash-strapped AU troops who have failed to stop the bloodshed in Darfur.