March 18, 2007 (WADI ANKA, Sudan) — Ahmad Salaheddin is an Arab who has crossed the ethnic divide in Darfur‘s bloody war to fight alongside ethnic African rebels. His fellow rebels jokingly call him a “janjaweed” — one of the Arab militiamen who are their fiercest enemy. 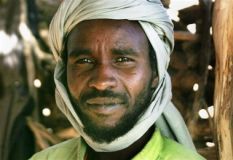 The fight in Darfur is usually defined as between Arabs and ethnic Africans: the ethnic Africans launched a rebellion in 2003 and the Arab-led Sudanese government is accused of arming Arab tribesmen in Darfur to help put it down.

The Arab janjaweed militias have since carried out a campaign of violence against ethnic African civilians, killing and raping and driving hundreds of thousands from their homes, the United Nations says.

There are also several major Arab tribes that from the start have refused Khartoum‘s enticements to join the janjaweed. So the government has armed smaller, more impoverished clans for the militias — disrupting the traditional power structures among the Arab tribes.

Another complication is that the regular government troops in Darfur fighting the rebellion are mainly ethnic African draftees from other parts of Sudan. The rebels say they do not fear those government troops as much, because they are not enthusiastic fighters and are easier to combat than the janjaweed.

“They don‘t care about us any more than they care about the Africans,” he told The Associated Press. “In fact, our conditions here are just as bad.”

But there were also neighborly relations, tightened sometimes by intermarriage.

“It‘s sad, because we used to get along quite well,” he said. “I don‘t think it would be possible anymore … Too much blood has been spilled.”

The Sudanese government has decided to suspend all cooperation with the International Criminal Court in response to the accusations, the justice minister and a pro-government newspaper said Sunday.

Overall, more than 200,000 people in Darfur have been killed since 2003, and more than 2.5 million people, largely African villagers, now live in massive refugee camps scattered across Darfur and spilling over into neighboring Chad.

Darfur itself is being carved up. The ethnic African rebels of SLA now control a vast section of northern Darfur that is now practically empty of any Arab nomads and mostly inhabited by ethnic Africans from the Zaghawa tribe.

But other sections of Darfur — like Jebbel Midob in northeastern Darfur — are now largely in the hands of Arab nomads brought in by the government from southern Darfur.

SLA rebel commander Mohamed Ali, whose home is in the region, said villagers who tried to return to that region from refugee camps to cultivate their land were being killed.

The Arabs “have even given the place a new name, Waha, to make it sound like it‘s always been theirs,” he said.

Deby – Force may be needed to resolve Darfur conflict

Al-Bashir hits back at ICC!