March 18, 2007 (LONDON) — Darfur rebel leader denied charges of human rights violations by UN rights report last week. He further said that his group had urged the intervention of the international community to protect and to relief civilians in the troubled region of Darfur and can’t defeat their statement. 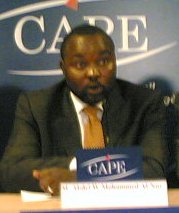 Abdelwahid al-Nur, the leader of the Sudan Liberation Movement welcomed a UN rights Council report condemning the violation of human rights committed against civilians in Darfur. But the dismissed the charges against the rebel movements in the region.

He reminded that his group was the first to appeal the intervention of the UN and the NGOs on the ground to assist the affected population in the region. ‘How we can appeal world to provide humanitarian aid and we attack those feeding our people, he said.

Al-Nur also denied violation of Human rights. He said that his organization is very keen to be beside the affected people and to defend its rights “our legitimacy emanates from Darfurians because we are their voice and we can not commit atrocities against them.”

He further said that if he is “so popular among IDPs”, this can simply be explained by the action of the SLM among the displaced and the huge effort exerted to relay their voice to the world.

The rebel leader said that the SLM is ready to respond positively to any demand of information in this regard and to collaborate with the international community to arrest authors of any eventual violations in their controlled area.

Almost 200,000 people have been killed and more than 2 million driven from their homes since a revolt broke out between rebels and government-backed Arab militias four years ago in Darfur, a vast western region of Sudan that borders Chad.

The Sudanese government, which denies responsibility for Darfur abuses, refused to give the U.N. team visas to access the region last month after objecting to one of its five members.

W. Sudan: a complex ethnic reality with a long history