March 19, 2007 (JUBA, Sudan) — South Sudan leader Salva Kiir has stripped his finance minister of immunity from prosecution to allow authorities to question him in connection with a graft inquiry, a minister said on Monday. 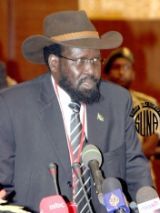 Minister of Parliamentary Affairs Gabriel Changson Cheng said Arthur Akuien Chol would be questioned about a case involving a number of his aides who were dismissed for buying vehicles for the government and police above market prices.

“The president passed a decree lifting the immunity of the minister of finance and economic planning on Saturday, and assigned me to be caretaker for the ministry,” he told Reuters.

Under the 2005 peace agreement between north and south Sudan that ended 21 years of civil war, the south formed a semi-autonomous state with its own government headed by Kiir, who is also vice-president of the national government.

In January, two undersecretaries and the ministry’s director of taxation were dismissed after an investigation team that Kiir had formed accused them of inappropriate dealings with Al Cardinal company.

The government said that one undersecretary, Isaac Maker, had instructed all ministers and government agencies to buy vehicles from the company.

Paul Lugale Jumi, a member of the investigation team, said billions of Sudanese dinars (millions of U.S. dollars) were spent on cars for police and other authorities, including government officials.

He said some of the cars had not been delivered.

Cheng said he would remain in charge of the finance ministry until the issue was resolved either by Chol being reinstated “or if a new minister of finance is wanted.”