April 20, 2007 (UNITED NATIONS) — The United Nations refugee chief heads to Sudan next week to discuss the western war-torn region of Darfur, home to a swelling population of internally displaced persons (IDPs) and Chadian refugees, and to also spotlight the forgotten situation in the country’s east, where Eritreans and Ethiopians have been living in camps for almost 40 years. 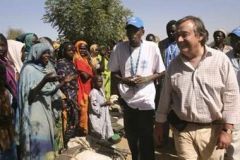 The trip, the second to Sudan by Guterres, will take place as the UN system has asked UNHCR to expand its operations in Darfur, where clashes between Government forces, allied Janjaweed militias and rebel groups have killed more than 200,000 people since 2003 and displaced another 2 million from their homes.

West Darfur, one of three states comprising the vast Darfur region, is home to an estimated 700,000 IDPs, and UNHCR currently has access to about 500,000. Some 25,000 refugees from neighbouring Chad are also living in areas adjacent to the border.

Redmond said Guterres is set to then travel to eastern Sudan’s Kassala state on Thursday to visit Kilo 26 and Wad Sherife, two camps for Eritrean and Ethiopian refugees.

Eastern Sudan is home to about 136,000 refugees and there have been camps in that part of the country since 1968, but the situation there is largely forgotten because of the better known refugee situations of Darfur and southern Sudan.

Redmond said UNHCR is shifting its activities in eastern Sudan from providing assistance to devising durable solutions, focusing on local integration as voluntary repatriation is not currently an option. Resettlement is also being considered for special cases.

One killed after clashes between police and students in Darfur

How oil drives the genocide in Darfur