April 26, 2007 (RABAT) — Key players in the crisis over western Sudan’s Darfur region will meet in Libya this weekend as U.S. patience with Sudan runs low and the threat of international sanctions hangs over the Khartoum government. 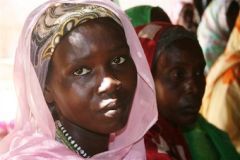 The United States and Britain are demanding that Sudan accept a strong U.N. peacekeeping force in Darfur, where four years of conflict — termed genocide by Washington — have killed at least 200,000 people and displaced some 2.5 million.

The talks planned for Saturday and Sunday are the latest in a series hosted by Libya, whose leader Muammar Gaddafi styles himself as an African nationalist and believes the continent should solve its own problems without being reliant on the West.

A Western diplomat said that while Libya hoped for a breakthrough, it was doubtful whether the hosts were prepared to exert sufficient pressure on Sudan to achieve this.

“They (the Libyans) want to get a recommitment to a proper ceasefire, with a set of measures to be taken against anybody who breaks it,” the diplomat said, while noting that Libya is opposed to sanctions.

An overstretched African Union (AU) force of some 7,000 peacekeepers has so far failed to stop the violence, and one of its officers said this week that Arab militias, known as Janjaweed, were killing and pillaging with impunity.

The Sudanese government rejects the term genocide and denies any connection with the militias, calling them outlaws and insisting that it takes action against them when it can.

So far Sudan has agreed to a “heavy support package” for the African Union troops in Darfur that includes some 3,500 U.N. military and police personnel.

But Khartoum has not approved a “hybrid” U.N.-AU force of more than 20,000 troops and police, which the U.N. Security Council first authorised last August.

Britain and the United States have been drawing up a sanctions resolution if Sudan continues to balk at U.N. demands, although no date has been set for its introduction in the 15-member U.N. Security Council.

Among the measures under consideration are an arms embargo for the entire country. Separately, Washington has already imposed sanctions of its own and is considering more.

Libyan state media have been silent on the weekend talks and diplomats said Libya had not circulated proposals in advance.

Libya has stepped up its involvement in trying to find a peaceful solution in Darfur and stop that conflict from spreading into neighbouring countries.

Libya has taken a lead in trying to broker peace between Chad and Sudan, which accuse each other of supporting rebels involved in cross-border attacks.

In early April, a Libyan envoy in Khartoum announced Libyan and Eritrean observers would be posted along the Chad-Sudan border.