October 23, 2021 (KHARTOUM) – Yasir Arman, a member of the leadership of Forces for Freedom and Change (FFC), rejected calls by the military component to dissolve the civilian government, pointing out that what must be dissolved is the Sovereign Council.

On Saturday, leaders of the ruling FFC coalition held a press conference to thank the popular demonstrations on October 21 in support of civilian rule in Sudan and the implementation of democratic reforms.

Speaking at the press conference, Arman reiterated the ruling coalition’s confidence in the transitional government and Prime Minister Abdallah Hamdok, adding that the Constitutional Document defines the competencies of the different transitional institutions.

“This government will not be resolved by a decree from any party, and we support the government and the prime minister,” he said

The constitutional declaration governing the transition provides that the Prime Minister who is nominated by the FFC chooses the members of his cabinet from the candidates proposed by the ruling coalition and the peace signatory groups.

The defence and interior ministers are nominated by the military component.

Arman stressed that the current crisis is artificial and is part of a “creeping coup”.

He underscored that the Council must be a collegial leadership, not owned by a single individual.

“Now the activities of the Sovereignty Council have been suspended for a long time, and this is harmful and has aggravated in the current crisis”.

“If the Sovereign Council works and seeks to find solutions to the crisis, as it is a council of the wisdom (this might help to end it),” he added.

He said that two members of the Sovereign Council were the ones who decided to stop the work of the 12-member council.

Arman was alluding to al-Burhan and Gen Mohamed Hamdan Daglo, whom al-Burhan appointed as his deputy despite the absence of a provision in the Constitutional Document about the position of the Deputy Chairman.

Arman, also, pledged to reform the FFC’s government saying that it will be done through a review of the portfolios given to every party.

He said the imposed reforms strip the people of the power they gained in the December revolution.

“The December revolution gave power to civilians, and how can we return it to others, this would be a betrayal of the Sudanese people,” he stressed 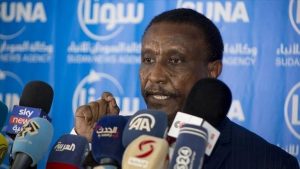 JEM-Dabajo calls for retaining the five states in Darfur