May 23, 2007 (EL-GENEINA) — U.N. military personnel set to bolster African peacekeepers in Sudan’s war-ravaged Darfur need at least three to four months to get in place, a senior African Union officer said on Wednesday. 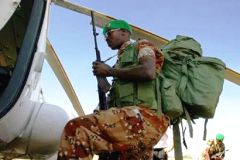 But the officer, speaking on condition of anonymity at the wind-swept AU base at el-Geneina where some of the African Union’s roughly 7,000 Darfur peacekeepers are housed in tents, said only a much larger peacekeeping force could ultimately stem violence in Darfur.

The United Nations estimates that about 200,000 people have died and more than 2 million made homeless since ethnic and political conflict flared in Darfur in 2003 when rebel groups took up arms against Khartoum, accusing it of neglect.

Sudan says only 9,000 have died. A 2006 peace deal between the government and one rebel faction has so far failed to halt the violence.

The U.N. reinforcements, about 1,000 of which will be posted at el-Geneina in West Darfur, are due to come as part of a U.N. “heavy support package” of more than 3,000 U.N. military personnel for Darfur that Khartoum agreed to in April. “We are looking at the timeline and the troop contributing countries and the preparations. … I think the minimum is three to four months,” he told journalists on the sidelines of a fact-finding mission to Darfur by an AU Peace and Security Council delegation.

He said the African Union base at el-Geneina would be expanded to make room for the influx there, and solid structures would be built to house the newcomers.

In addition to around 1,000 U.N. personnel expected at el-Geneina, around 2,000 more would be divided between two remaining Darfur sectors, the officer said.

But the officer said that while attack helicopters included in the heavy support package would help deter attacks on AU patrols, the personnel influx was too small to significantly decrease violence in Darfur.

“Eventually, I think they (Sudan) will have to accept either a hybrid or a bigger force, whatever they call it,” he said.

“We can only decrease (violence) if our troop levels are doubled or tripled. We would prefer 18,000-plus because the size of the area is huge,” he said. He added the attack helicopters would only be used as a deterrent and in self-defence.

Khartoum has not approved a “hybrid” U.N.-AU force of more than 20,000 troops and police approved by the world body. African Union officials said that after delays, forces were also resuming patrols on Wednesday in a Darfur village where five Senegalese soldiers were killed last month in the deadliest single attack on the force since its 2004 deployment.

Officials said they believed the patrols had resumed, but were still waiting on word from Um Barro on how the patrols had proceeded. The African Union suspended patrols near Um Barro last month after gunmen killed the peacekeepers as they guarded a water point near the Chadian border. Three gunmen were also killed.

The attack took place in an area of North Darfur controlled by forces loyal to the SLM. Since the attack, African Union soldiers posted nearby had been largely confined to their camp, officials said.