UK’s Blair calls for tougher action against Sudan over Darfur

May 31, 2007 (JOHANNESBURG) — U.K. Prime Minister Tony Blair called Thursday for tougher action against Sudan over the killings in Darfur, accusing its president of “bombing his way to a solution.” 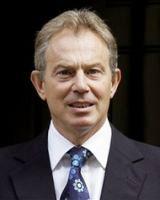 On his farewell tour to the world’s most strife-ridden and impoverished continent, Blair said both the West and Africa faced two possible paths.

“One is chosen by countries like South Africa, Ghana, Tanzania, Mozambique, Botswana and many others, reinforcing economic growth with good governance and the stamping out of violence and corruption,” he said. “The other, the path of Zimbabwe or Sudan, where bad government and violent oppression send the country’s economy spiraling down.”

“Our choice is to support the good. Africa’s challenge is to eliminate the bad.”

In a speech at the University of South Africa near Johannesburg, Blair singled out the crisis in Darfur, which has killed an estimated 200,000 people, left 4 million dependent on food aid and sent more than 230,000 fleeing.

“It is wrong that (Sudan’s) President (Omar) Bashir, intent on bombing his way to a solution, is determined to obstruct any effort made to reinforce the Africa Union’s ability to improve security and stability,” he said.

“We must offer President Bashir a choice. Engage with us on a solution. Or, if you reject responsibility for the people of Darfur, then we will table and put to a vote sanctions against the regime,” he said.

U.S. President George W. Bush announced Tuesday the U.S. would draft a U.N. resolution meant to pressure Sudan, and Blair’s government has said it would support that initiative.

Thursday, Blair used his speech to an invited audience to emphasize the priority that he has given to the continent during his term in office. He said that debt-relief programs had helped countries like Zambia provide free basic health care. Funding from the U.K. and the West had helped improve education and provide life saving anti-AIDS drugs to hundreds of thousands, he said.

But he said far more needed to be done and stressed that the upcoming Group of Eight summit needed to follow through on commitments made two years ago, when the U.K. made Africa the focus of it presidency of the G8.

He said it was vital to achieve a breakthrough in the next few weeks in crisis-ridden global trade talks, saying the deal offered the best solution of lifting “millions out of poverty.”

Blair has won praise from some African leaders but others says that the U.K. and other Western countries have not fulfilled lofty promises and high-sounding declarations.

He was due to meet anti-apartheid icon and former president Nelson Mandela and visit the nation’s biggest hospital in Johannesburg later Thursday.

Blair is due to meet with South African President Thabo Mbeki Friday for talks likely to include the crisis in neighboring Zimbabwe. Mbeki, who is southern Africa’s mediator on Zimbabwe, is staying true to his long-standing policy of quiet diplomacy which has so far failed to persuade President Robert Mugabe to embrace political and economic reform. The U.K. has argued that South Africa must do more to pressure Mbeki into change.

AU Peace Commissioner in Khartoum for talks on Darfur force