July 11, 2007 (RAFAH, Egypt) — Darfur refugee Tony Mau Tyublis, his hands in iron shackles, sold everything he owned to pay Bedouin smugglers to ferry him across Egypt’s desert frontier into Israel where he hoped for a new start at life. 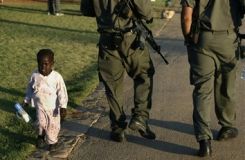 But his journey was cut short as Egyptian police stepped up efforts to block a surge of African migrants from slipping into Israel after rumours swirled through crowded Cairo slums that Israel would welcome them with open arms and give them work.

“Living in Israel has become a dream for so many Sudanese families who have fled Darfur for Egypt. … We are searching for protection and settlement,” Tyublis, 29, said at an Egyptian police station in Rafah where he was detained.

“Once I made it into Israel, I was planning to find work so that I could send money to my wife so that she and my three children would be able to join me.”

The Sinai peninsula, home to an often disgruntled Bedouin population, has long been host to smuggling rings who will slip people, weapons or drugs and tobacco across the Egyptian frontier into Israel or the Gaza Strip for a price.

Egyptian authorities arrested 106 Sudanese in June as an increasing number tried to cross the dangerous desert frontier into Israel from Egypt’s Sinai peninsula, compared to just 74 in the previous five months, an Egyptian security source said.

A rights activist working with Sudanese migrants said more than 390 arrived in Israel in the first six months of 2007.

The migrants, mainly Muslims and Christians, are drawn to Israel by rumours of better living conditions and hopes of gaining asylum there, but are also keen to leave Egypt where activists say they face persistent racism, abuse, and economic marginalisation.

Anat Ben Dor, head of the refugee rights clinic at Tel Aviv University, said more Sudanese were crossing the border after Israel conditionally freed 250 Sudanese migrants from jail in recent months, allowing them to work in tourist hotels in Eilat.

She said small numbers had also been released to work on collective farms.

“The possibility will be considered of assisting a small portion of the refugees from Darfur who are in Israel only after the full blocking of infiltrations is assured,” a statement from Olmert’s office said.

Sudanese migrants who want to attempt a desert crossing meet Arab middlemen in Cairo restaurants frequented by African refugees. The middlemen arrange the trek for $200 to $500, according to a Bedouin smuggler active in the trade.

“We leave the Sudanese in a Bedouin tent so that if the police arrest them, we’re far off,” said the smuggler, who gave his name only as Salim, as he gestured toward a field of peach trees about 15 km south of the Egyptian border town of Rafah.

“We wear masks so none of them can identify us,” he said, adding that migrants tended to cross in groups to save money.

In Sinai, Bedouin smugglers use small, unmarked trucks to move migrants along paths unknown to police to points where there are gaps in Egyptian and Israeli security lines, he said.

“But our role is limited. … We just ease their crossing through the barbed wire and into Israeli territory.”

Once near the border, the migrants leave the trucks and go into Israel on foot, then wait to be picked up by Israeli border patrols and taken to camps in the Negev desert, he added.

An Egyptian security official in north Sinai said Egypt has tried to stop the border infiltrations but to little avail.

“We have strengthened our security measures but arresting all of the would-be immigrants is a difficult task, considering the length of the Egyptian-Israeli border,” he said.

Last week, police fired on of a group of migrants in the border area who failed to respond to orders to stop, seriously injuring a Sudanese man, an Egyptian security source said.

Activists working with the migrants in Cairo have tried to dissuade them from going to Israel, where Sudanese are considered “enemy nationals” and may not apply for asylum but have also typically not been deported.

Olmert’s office said Israel had not decided to give permanent status to refugees from Darfur, where at least 200,000 people have died since a conflict erupted in 2003.

Israel and Egypt had also agreed to send any so-called economic migrants back to Egypt.

But that message was not dissuading some from trying to cross the border, and even an Egyptian security official said he had heard Israel was welcoming the Sudanese.

“We have information that Israel has created camps to receive the refugees and that they want these immigrants for work on their farms,” the official said.