Arusha does not guarantee participation in Darfur peace talks

August 4, 2007 (ARUSHA) – The AU envoy to Darfur has told the delegates of the non-signatory movements that attending Arusha meeting does not mean they will all participate in the final peace talks with Khartoum. 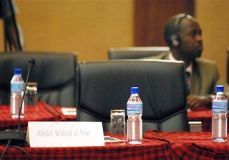 Salim Ahmed Salim stated during his speech at the opening session of Arusha consultations meeting that their participation “do not guarantee anyone a seat on the table at the final negotiations. “The decision on who is invited to the final talks will be guided by the outcome of this and other consultations on the ground in Darfur and the Sudan”, he said.

The mediator emphasized that the objective of this meeting is to help rebel groups to meet and exchange view on how they can find “the internal cohesion and platform to negotiate a new dispensation in Darfur, one that will bring concrete evidence of the dividends of peace to your people.”

The meeting convened from 3 to 5 August in Arusha by the African Union and United Nations Special Envoys for Darfur, Dr. Salim Ahmed Salim and Mr. Jan Eliasson, with representatives of the Movements non-signatory to the Darfur Peace Agreement started yesterday 3 August 2007.

Salim deplored the absence of SLM leader Abdelwahid al-Nur. “That is his choice”, he said, adding that he hoped “that in the interest of the people he has been fighting for, he will soon join his brothers and sisters from Darfur, so that we can achieve an early political settlement to the Darfur conflict.”

UN envoy Jan Eliasson stressed that in organizing the Arusha meeting, they gave highest priority to consultations amongst the representatives of the movements as cohesion and coordination of their positions will be key to the success of the political process.

Eliasson enumerated five objectives for Arusha meeting: enhanced dialogue and cooperation between the movements; full acceptance and commitment to the AU-UN Joint roadmap, in particular commitment to engage soon in negotiations; presentation of proposals on ways and means to ensure that the views of the IDP community and civil society are represented during the negotiations; ideas about the venue, format, and date of the upcoming negotiations; proposals of confidence-building measures, for instance an effective cessation of hostilities, containing and stopping banditry, protection of humanitarian personnel and assets as well as humanitarian access, and ideas that could improve the situation between the movements and the Government.

The Arusha meeting, which gathers a good number of representatives of non-signatory movements for the first time since the signing of Abuja peace deal in May 2006, is scheduled to continue until 5 August.

The Arusha meeting will be immediately followed by extensive shuttle diplomacy to be undertaken by the Special Envoys and the AU-UN Joint Mediation Support Team, which includes in depth discussions in Khartoum and Darfur with the DPA signatories on preparations for the upcoming negotiations, to which invitations are to be issued before the end of August.

One dead as clashes erupt in South Darfur