August 27, 2007 (ZALENGEI) — Thousands of Darfuris demonstrated angrily on Monday in Zalengei town to show African Union envoy Salim Ahmed Salim their despair over a peace process that has failed to bring security to western Sudan. 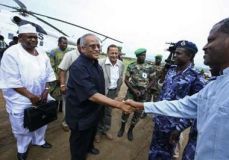 Salim travelled to Zalengei town as part of a tour of Darfur to get people’s views on efforts to renew talks to end the 4-1/2 year war that has driven 2.5 million people from their homes.

Protests greeted him in the region which is the birthplace of rebel Sudan Liberation Movement (SLM) founder and chairman Abdel Wahed Mohamed el-Nur and hostile territory for the AU.

A breakaway group of protestors chased Salim’s convoy from the airport to the town, brandishing sticks and knives. One sign read: “Abdel Wahed is brave, broadminded and true.”

On a hilltop overlooking town, thousands of women formed a multi-coloured mass protest as Salim met with community leaders.

For more than a year, African Union peacekeepers have been unable to patrol the three camps surrounding Zalengei, mostly inhabited by Darfur’s largest Fur tribe, because of opposition from the 150,000 people who fled their homes to makeshift camps surrounding the town.

Nur, who resides in Paris, and one other faction rejected a May 2006 AU-mediated peace deal, which Nur’s rival Minni Arcua Minnawi signed.

None of the farmers driven from their homes to Zalengei during what U.N. officials have called a “scorched earth” campaign have read that deal. But they oppose it because Nur told them to.

Salim was head of mediation during Darfur peace talks that produced the 2006 agreement.

Salim and his U.N. counterpart, Jan Eliasson, are trying to regain the confidence of the 4.2 million people displaced by the conflict and reliant on aid, and convince all Darfur’s population to back new talks.

Displaced Darfuris refused to meet Salim in the camps, but a few came to meet him in the town.

Despite the opposition Salim encountered, the message was mostly positive and clear. Residents want peace and security, and they want Nur to join a peace process that is expected to include talks with the government in the coming months.

“I call on Abdel Wahed to join the peace process,” said Ibrahim Ahmed, from an environmental group in Darfur.

“He has to unify his position with the other factions. There should not be three sides but one to sit face to face with the government,” he added.

Nur refused to attend a U.N. and AU-sponsored rebel unity meeting in Tanzania earlier this month where more than a dozen groups agreed on a common platform for peace talks.

He says he wants security and an effective international peacekeeping force on the ground before he will go to talks.

His supporters in Zalengei and the surrounding camps agree on security. But they said Nur should attend talks.

“We want the international forces to come and disarm the militias but at the same time we want Abdel Wahed to go to negotiate,” said Omda Zacharia Yahya Jamous, a tribal leader from the Hassa Hissa camp outside Zalengei.

Many nodded in agreement.

Almost unanimously, the leaders gathered wanted individual compensation and disarmament of all armed groups, rebels and militias, so they could return to their villages in safety.

Zalengei’s residents said only disarmament could resolve the conflict in Darfur.

“Now there are weapons in everyone’s hands, even children,” said Zalengei resident Hajja el-Senoussi. Her colleague next to her wiped tears from her eyes.

“In our homes at night we canot sleep for shooting. The children and elderly cannot rest in peace,” Senoussi added.

Ukrainian pilots kidnapped in South Darfur this month have been freed: official