September 13, 2007 (TORONTO) — A major Hollywood studio and top US screen star have unveiled a new documentary addressing the bloody conflict that has raged without resolution for four years in Sudan’s Darfur region. 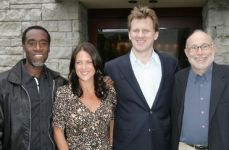 Darfur won a prominent place at this year’s Toronto film festival, with the debut of the politically minded documentary produced by studio giant Warner Brothers and featuring actor Don Cheadle.

In “Darfur Now,” US director Ted Braun chooses not to focus on the constant violence in western Sudan, but instead on the efforts of six people trying to find an end to the war that the United Nations says has killed 200,000 people and displaced two million.

The goal of the production was not to go to the front line but “to show the hope” embodied by those trying to end the bloodshed, said Braun, who spent four months filming in Sudan.

Along with Cheadle, star of “Hotel Rwanda,” Braun’s team follows a prosecutor with the International Criminal Court, Luis Moreno-Ocampo, an American activist, and a Darfur woman who joined rebel forces after the death of her son.

Moving back and forth from Darfur, California, The Hague, Beijing and UN headquarters in New York, the documentary attempts to convey the complexity of the conflict and of any possible solution, the director said.

“It is an extraordinarily complex conflict,” Braun said.

But the film also is meant to stir international public opinion to take up the Darfur issue, he said.

A young Californian activist in the documentary, Adam Sterling, serves as a kind of model for civic action.

After meeting US senators, Sterling enlists the support of screen star and Darfur activist George Clooney, Cheadle and California Governor Arnold Schwarzenegger for a law banning pension funds in the state from investing in companies with ties to Sudan.

Sudan has refused to hand over Ahmed Haroun, Khartoum’s humanitarian affairs minister, to the court despite allegations that he was the mastermind behind the Arab janjaweed militia persecuting civilians in Darfur. Washington calls Khartoum’s campaign in Darfur “genocide.”

“The documentary makes you understand the case about Haroun,” Moreno-Ocampo told AFP.

“Haroun developed and implemented the idea to use the janjaweed to attack the people,” the prosecutor said. “And now Haroun is in charge of those people who stayed.”

Moreno-Ocampo, invited to the Toronto festival for a round table discussion on Darfur that accompanied the film’s premiere, said removing Haroun is “the big first step” to brokering a solution to the conflict.

“At the end it is Haroun against the world. If the world is together, the world will win,” he said.

The director, whose documentary’s narrative and visual effect seems above all aimed at striking an emotional chord with Americans, defended his relations with Sudanese authorities — who gave him permission to film.

“I think that demonizing that country, and demonizing the people that are out there is a terrible mistake,” said Braun, who won approval from Khartoum to film in Darfur but had to work under some constraints.

As the film made its debut in Toronto, officials announced talks between the Sudanese government and rebel factions were set to resume, which Darfur activists like George Clooney greeted as a promising development.

“We’re in a position right now where we actually have for the first time a shot at a peace treaty, not only with the government of Khartoum, but with all the warring parties,” said Clooney.