September 14 (KHARTOUM) — Rebel commander in the Darfur region of western Sudan urged the founder of their movement on Friday to take part in negotiations on ending four and a half years of conflict in Darfur. 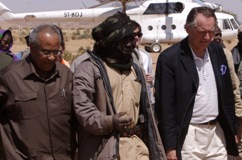 Peace talks between the Sudanese government and the rebels are due to open at the end of October in Libya under the auspices of the United Nations and the African Union.

But Abdelwahid al-Nur, founder of the Sudan Liberation Movement/Army (SLM/A), has set conditions for taking part.

“We want him to come and state his demands at the negotiating table,” Jarelnabi, an SLA commander, told Reuters. “His refusal to participate in the negotiations does not serve our cause,” he added.

International experts say some 200,000 people have died as a result of the conflict and 2.5 million have been driven from their homes. Khartoum disputes the numbers.

“He (Nur) is intransigent and believes he can resolve the Darfur problem alone. That is not right,” said Jarelnabi.

Last week the vice president of the government of semi-autonomous southern Sudan, Riek Machar, visited Nur in Paris in an attempt to persuade him to join the peace process, but he left empty handed.

Nur produced a list of demands he said should be met before he can participate in any negotiations.

“We want a robust international force to be deployed in Darfur and we want the government to end the genocide and raping,” Nur’s spokesman, Yehya Bolad, told Reuters.

“We also want Arabs from neighbouring countries who the government has settled on our lands to be evicted, we want the Janjaweed (Arab militias) to be disarmed and we want the displaced people living in camps to be able to return to their homes,” he added.

Until this happens, said Bolad, “we are not going to be part of the negotiations in Libya.”

Jarelnabi advised Nur to be flexible. He further added he would go to the talks.