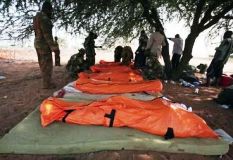 JEM spokesperson, Ahmed Hussein Adem, condemned attack against the AU troops in Haskanita where ten AU are killed by unknown attacker. He also dismissed reports that JEM troops had carried out the attack on the AU peacekeepers in the area.

He confirmed what Sudan Tribune published yesterday that JEM troops were evacuated Haskanita since one week after continual aerial bombardments by Sudanese army.

“The coward and callous attackers knew that JEM forces were not in the area having engaged them and learnt another lesson from them four days ago, several hundreds of miles away north of Alkuma town.” He said.

Nevertheless without designating explicitly the responsibility of the Khartoum, Ahmed said “intelligence available to us points to Government army backed by their allied Janjaweed who were closing on Haskanita area from three fronts in the past few days.”

“Their original aim was to avenge the embarrassing Haskanita defeat at the hands of JEM.” He underlined.

At least 10 AU soldiers died in the assault. More than 20 were still missing last night, some 48 hours after the attack. Originally 50 had been unaccounted for.

According to London based The Independent, United Nations personnel based in Darfur have been prevented by the Sudanese government from evacuating their African Union comrades following Saturday’s attack which killed at least 10 AU troops.

The UN mission in Sudan tried to send a rescue team to the AU’s base in Haskanita, North Darfur, in the hours following the attack. But they were denied access by Khartoum and it was several hours before the Sudanese armed forces sent their own troops to Haskanita to evacuate the remaining AU soldiers.

The AU base at Haskanita is strategically important. It is about 12 miles (19 kilometers) from the boundary between Darfur and the neighboring region of Khordofan. The Darfur rebels have been trying to link up with new rebel groups in Khordofan, where there are large fields of Sudan’s proven oil reserves.

Most of the 157 peacekeepers on the base were Nigerian but there were also military observers from Botswana, Senegal and Mali.

The attack came amid increasing violence in Darfur, where government and rebel forces appear to be fighting for positions ahead of the peace negotiations set to open in Libya on Oct. 27. The government and most of the main rebel factions have said they will attend.