Sudan is responsible for the “crime against humanity” – US Carter 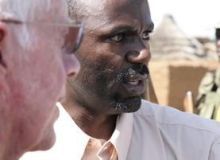 But the group of prominent personalities including former statesmen and international officials was sharp and direct in closing comments after a two-day tour of Darfur. Their visit was the debut mission of a group of “Elders” chaired by former South African president Nelson Mandela who are trying to use their influence to bring peace to conflict zones. Mandela was too frail to join the trip.

In an AP interview, Carter said the Sudanese government was responsible for the “crime against humanity” in Darfur, accusing government-backed Arab militias known as the janjaweed of “ethnic cleansing” in black villages.

Carter, 83, got in a fight with the head of national security in the town of Kabkabiya on Wednesday because he was being blocked from meeting any of the ethnic African refugees, and his security entourage urged him to let the feared state police have their way.

His delegation struck a sharp tone at a news conference with Sudanese journalists in Khartoum early Thursday.

Tutu said he was appalled by the “unbelievable squalor” of living conditions for the refugees he visited in southern Darfur. Mandela’s wife spoke out against widespread rape of women refugees and the Sudanese government’s indifference.

“I have to confess it was the most depressing moment of our conversation,” she said. “The government doesn’t seem to have an understanding of what it means for women to say ‘We are being raped.'”

“There is no reason for the government to continue to bomb people,” Carter told the unusually mute Sudanese reporters, who didn’t ask a single question at the press conference.

At least 200,000 people have died and 2.5 million have been displaced since ethnic African rebels in Darfur took up arms against the Arab-dominated central government, accusing of discrimination and neglect.

Hours before Tutu visited the Darfur town of Nyala on Wednesday, a gunbattle broke out between government forces and followers of the sole rebel chief who had signed a peace agreement with Khartoum, the U.N. said. Six people were killed.

The delegation vowed they would do more than be outspoken to help resolve the conflict.

“We are hoping not to be seen as another tourist group seeking photo opportunities,” Tutu said after the group held its second meeting with al-Bashir.

Some of their achievements were not immediately clear. Carter initially announced that al-Bashir promised them a $100 million compensation fund for Darfur victims, backed by $200 million from China. But it later turned out that some of these funds were reconstruction money that had been pledged a year earlier.

Al-Bashir did agree to invite observers from the ex-president’s Atlanta-based Carter Center to monitor Sudan’s general elections. The vote, due in 2009, is considered crucial to preserving a fragile peace in southern Sudan and improving conditions in Darfur.

Amid fears that the elections could be postponed, al-Bashir’s invitation was one of the most significant commitments to the vote made by the government.

The group urged all of Darfur’s splintered rebel factions to accept new peace negotiations due to open in Libya later this month. They also drew up a list of recommendations for world leaders, along with the United Nations and African Union, which will be mediating the peace talks.

Their advice included having 30 percent of the delegates to the negotiations be women and ensuring that civilians — not just the rebel groups — be represented.

“Some of these rebel groups have no constituency, just their own bandit followers,” Carter said.

Tensions are high after rebels killed 10 AU peacekeepers over the weekend, in the deadliest attack on the beleaguered force since it arrived in Darfur three years ago.

The delegation expressed outrage at the 7,000-member force’s poor equipment and funding, calling on Western countries to commit strong support for a new U.N.-AU joint force of 26,000 peacekeepers due to take over on Jan. 1.

The new force risks delays if it does not receive enough commitments.

British billionaire Richard Branson said he and singer Peter Gabriel came up with the idea of the elders in 2003 during the run-up to the war in Iraq.

“We were going to fly Nelson Mandela to Baghdad so he would ask Saddam Hussein to step-down,” Branson told AP. A jet had been charted for Mandela, but the bombings on Baghdad began just before he was to take off.