October 29, 2007 (RUMBEK) — The Lakes State Minister of Information and Communication, Adak Costa Mapuor has said Telecommunication Services should be improved in Lakes State. 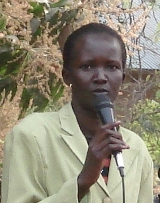 Speaking at Rumbek airstrip before her take off on Friday for Juba, Adak Costa told Sudan Tribune she would meet with Government of South Sudan’s (GoSS) Minister of Telecommunication and Postal services, Gier Chuang Aluong.

She added that she would also meet with the new Ministers of Information and Social Development on issues of women empowerment.

Rumbek is one of the renowned towns in Southern Sudan where there are no telecommunications network.

People in Rumbek rely on Satellite phones for communication, which are not affordable by all.

Nevertheless Adak will meet the new appointed minister Gabriel Changson to discuse the issues of Radio Rumbek FM – 98 and gerevices of information especially the follow-up of one car that was donation by former minister of Information Dr. Samson Kwaji, including the training capacity building of Radio Rumbek FM-98 local reporters.

Pointing out that, there will be special meeting with Albino Akol Akol the new appointed minister for Culture, Youth and Sports because there were some promises of Sports and youth activities promised by former minister John Luk Jok that need to be achieved by the end of this year.

Adak is expected to be back on coming Friday to Lakes State the capital of Rumbek.