October 31, 2007 (OTASH CAMP, Sudan) — Sudanese officials have been pressuring people to leave refugee camps in its wartorn Darfur province in recent weeks, and United Nations officials say the regime has even forcibly loaded some civilians onto trucks to clear them out. 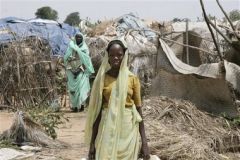 Rights activists say Sudan hopes to empty the camps before January, when a U.N.-African Union force of 26,000 peacekeepers is to deploy in Darfur. Some refugee leaders think the Arab-dominated regime wants to scatter the ethnic African refugees before a national census.

Sudanese officials agree they want the camps to close, saying the camps have become too big, squalid and dangerous and have made refugees too dependent on humanitarian aid. They insist, however, that no one is being forced to leave.

But this week, U.N. officials said they had evidence Sudanese government forces were chasing refugees out of at least one camp – Otash, which houses 60,000 people on the outskirts of south Darfur’s capital, Nyala.

“Given that security forces were threatening the displaced with sticks and rubber hoses at Otash camp, the involuntary nature of this relocation is clear,” the United Nations’ humanitarian chief, John Holmes, said in a statement.

He said such practices violated U.N. agreements with Sudan on the treatment of people forced from their homes during a nearly five-year war between ethnic African rebels and the Sudanese government based in Khartoum.

In the incident cited by the U.N., Holmes said 10 armed pickup trucks rounded up refugees at Otash on Sunday. U.N. and aid workers were initially barred from the camp, but eventually got in to see eight large commercial trucks being loaded with the belongings of women and children, he said.

Most Darfur refugees agree conditions at camps are bad, but they say they have nowhere else to go because their villages remain too dangerous.

“Do you think we like living here? Do you think we have a choice?” Husseina Mukhtar said recently at Otash, before the incident reported by the U.N. but when an increase in government harassment of refugees was already evident. As she spoke, the stench of overflowing latrines hung over the camp, a result of officials refusing to allow any more latrines to be built.

The U.N.-affiliated International Organization for Migration, which monitors refugee movements, says it is difficult to assess the number of refugees returning to their homes across Darfur because poor security makes it dangerous to visit camps.

The group’s Darfur coordinator, Gerard Waite, said recently that it had counted 20,000 refugees going home as of late September, but said more could have left camps without being monitored.

Nevertheless, he added, whatever the number of returnees, the overall population in refugee camps had been little changed because of 170,000 new arrivals this year.

Violence has gripped the vast region of western Sudan since early 2003, when rebels from Darfur’s ethnic African majority took up arms against the Arab-dominated government in Khartoum, accusing it of discrimination.

Rights groups accuse the regime of retaliating by arming local Arab militias known as janjaweed and blame the regime for widespread atrocities against civilians. Sudan’s leaders deny any guilt, but a Cabinet minister and a janjaweed chief have been charged with crimes against humanity by the International Criminal Court in The Hague, Netherlands.

The violence has killed more than 200,000 people and chased an estimated 2.5 million civilians into refugee camps in Darfur and neighboring countries. Most of Darfur’s camps, which house 2.2 million people, lie close to government-controlled towns but are teeming with rebels.

Break Through to Darfur