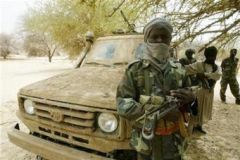 “There has been an initiative by an international party, and contacts are being held to obtain their freedom,” a Justice and Equality Movement chief told AFP.

The JEM said on Oct. 25 it had kidnapped the oil workers, three Sudanese, an Iraqi and an Egyptian, and its captives were “safe and in good condition…they will be safe as long as the government doesn’t bomb us.”

Abdelaziz el-Nur Ashr, field commander for the JEM in Kordofan east of Darfur, reached by telephone, didn’t elaborate Friday, but said he hoped the contacts would lead to freedom for the five.

“We have nothing against these civilians, and I think it will end with them being set free,” Ashr told AFP. “They’re in good hands, and only government intervention would put their lives in danger.”

He named the two foreigners as engineers Ahmed Heyman Mohammed from Iraq and Joseph William Samuel, who he said was Egyptian.

Asked about a JEM ultimatum to foreign oil firms to quit Sudan, Ashr said it expired Thursday and that “in future these companies will be solely responsible for what happens to them.”

The rebel group had warned it would attack foreign petroleum companies on the expiry of the deadline, but the Khartoum government played down the threat, saying it would ensure the security of oil facilities across the country.

Ashr said the JEM would target Chinese firms in particular.

“China is the main supplier of weapons to Sudan, it has always supported the government in the U.N. Security Council and it hasn’t provided even a single sack of grain to the people of Darfur,” he said.

The five oil workers were seized in an attack on a facility at Defra run by the Greater Nile Petroleum Operating Company, a consortium involving China’s CNPC, India’s Oil & Natural Gas Corp. (500312.BY), Malaysia’s Petronas and state-owned Sudapet.

The oilfield produces more than half of the country’s output of some 500,000 barrels a day, most of which is exported to China.

Beijing has often been accused of failing to exert pressure on Sudan’s President Omar al-Beshir to stop the bloodshed in Darfur, where conflict has left at least 200,000 dead and displaced more than 2 million, according to U.N. figures.

Attack on ICRC forces aid groups out of Darfur town